GM and Honda Teaming Up on U.S.-based Fuel Cell Manufacturing

Plant will provide hydrogen tech for new products from both companies. 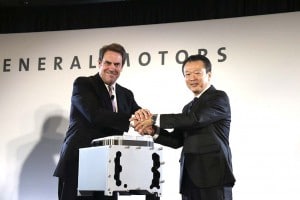 This story has been updated to reflect additional details and comments by both companies. New pics also have been added.

General Motors and Honda will set up a new plant in Michigan to mass produce next-generation fuel-cell technology that both companies plan to use in upcoming products, the automakers jointly announced Monday.

Honda is currently one of three automakers selling hydrogen-powered vehicles in the U.S., though GM was an early pioneer of the emissions-free technology and had been signaling plans to bring a fuel-cell vehicle, or FCV, of its own to market in the near future.

The two companies established a research joint venture three years ago,” with each company providing know-how from its unique expertise to create a compact and low-cost next-generation fuel cell system,” said Toshiaki Mikoshiba, chief operating officer of the North American Region for Honda Motor Co., Ltd. and president of Honda North America, Inc. “This foundation of outstanding teamwork will now take us to the stage of joint mass production.”

FCVs replace conventional internal combustion engines with a system called a “stack.” Oxygen from the atmosphere is combined with hydrogen – which can be stored in liquid form, or as a compressed gas. The process creates a flow of energy that can be used to power the same sort of motor drive system found in an electric vehicle.

Proponents claim significant progress has been made in recent years, fuel cells becoming smaller, lighter, more powerful and less expensive – though, like batteries, they still are far more expensive than comparable gasoline engines. GM and Honda are hoping that the new venture will bring production costs down closer to that of conventional automobile drivetrains. 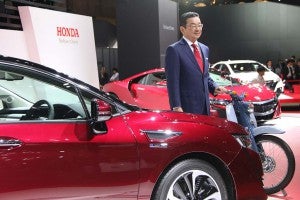 Many observers believe that, as global emissions and mileage rules tighten, fuel-cell vehicles and electric vehicles will vie for dominance in the marketplace. But each technology has its advantages and disadvantages, starting with price.

“Our focus is on reducing (a stack’s) cost,” Honda Senior Chief Engineer Takashi Moriya said during an interview following the announcement of the new fuel-cell project.

Batteries are heavy, slow to charge and limited in range – though improvements have allowed makers to start packing more into a vehicle, extending range, in some instances, to more than 300 miles per charge. And there’s a growing network of home and public chargers, though plugging in can take hours to reach a full charge.

Fuel-cell vehicles, by comparison, can tank up about as quickly as a regular gasoline vehicle. But there is a relatively limited infrastructure to produce and distribute the fuel. That’s why the new Honda Clarity FCV is only being sold in a few select parts of California: Orange County, the San Francisco Bay Area and Sacramento, where some pumps are currently available. California regulators hope to have a statewide network in place by the end of the decade, but it is unclear how soon it would spread across the U.S. 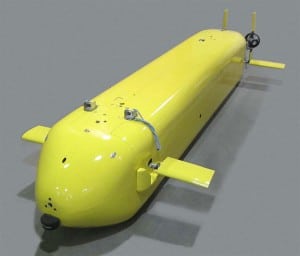 For their part, GM and Honda say the new plant should be up-and-running by 2020, each maker planning split the initial investment of $85 million, with further spending on the venture to follow. They expect the new plant to create 100 jobs.

They are not saying what sort of vehicles they plan to produce, though Honda is expected to use the fourth-generation stack in the next version of its Clarity FCX and other vehicles to follow. Nikishiba emphasized the maker’s plant to power two-thirds of its vehicle by zero-emissions systems by around 2030.

By then, several other carmakers plan to be in the fuel-cell business, including Daimler AG’s Mercedes-Benz brand. Korea’s Hyundai has said it will replace its current hydrogen car, a version of the Tucson SUV, and its sibling brand Kia will also have a model in production by 2020.

For its part, GM’s Reuss would not give a hard commitment on plans to put the new fuel-cell stack into a vehicle, noting the technology has a wide range of other, potential applications. That includes powering long-running unmanned research submarines, as well as troop carrying vehicles – both projects GM is working on with the U.S. military.

But Reuss did not dispute reports from industry analysts suggesting GM is also working on a production fuel-cell car for retail sales.