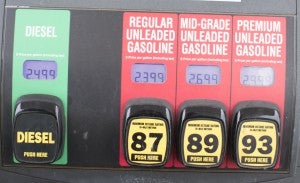 After climbing during the last month of 2016, the price of gasoline has retreated for the past three weeks, dropping to $2.27 per gallon, which is down four cents per gallon from a week earlier, according to the survey by AAA.

AAA said the growth in the number of U.S. oil rigs and the increased drilling it implies are raising expectations for a climb in domestic oil production.

Meanwhile, increased U.S. crude oil production and reduced demand has exerted pressure on the national average price at the pump, which has fallen for 21 consecutive days, AAA said.

The average price for regular unleaded gasoline is $2.27 per gallon, which is five cents less than one month ago, but 47 cents more per gallon year-over-year.

(GM and Honda teaming up on U.S.-based fuel cell manufacturing. Click Here for the story.)

Prices have been relatively steady during the past week despite reports of growing gasoline production and supply in the California market. The California Energy Commission reports that California reformulated gasoline inventories increased by 227,000 barrels to reach a total of 6.637 million barrels for the week ending Jan. 20.

(Click Here for details about VW surpassing Toyota for the global sales crown in 2016.)

So far this week, crude oil prices as a result of increased U.S. oil production. Oil-services firm Baker Hughes reported that drillers added 15 rigs in the U.S., bringing the total crude oil rig count to 556, the highest since November 2015.

The increase in U.S. production continues to offset OPEC’s efforts to rebalance the global oil market. End of month surveys of OPEC production cuts are expected tomorrow and traders will be paying close attention to the cartel’s agreement compliance, according to AAA’s analysts

Market watchers will also keep a close eye on U.S. production and the impact it has on supply and demand. At the closing of Friday’s formal trading session on the NYMEX, WTI was down 61 cents to settle at $53.17 per barrel, they said.