Could Volkswagen be charged up to bring back the Microbus? This suggests maybe.

For those still hoping to see Volkswagen finally bring back the iconic Microbus, you might want to keep an eye on what the German maker is unveiling at the North American International Auto Show next month. A close look at these three teaser images suggests we’ll be seeing a new perspective on the original minivan.

For now, VW isn’t saying much, other than noting that the concept is an alternate take on the Golf-sized battery-electric I.D. hatchback that made its debut at the Paris Motor Show in September. And it could provide a hint of what’s to come as VW prepares to launch more than two dozen new battery-cars during the next decade.

“The concept vehicle forges links between the legendary origins of the Volkswagen brand and its electrifying future,” explains a somewhat cryptic news release. “Like the I.D., this concept is also based on the Modular Electric Drive Kit (MEB), and so it shows the potential and bandwidth of the MEB.”

Long dependent upon diesels, VW is switching directions in the wake of its emissions scandal and putting an emphasis on electrification. During the Paris show, it rolled out the compact I.D., promising that it signals the coming of as many as 30 battery-electric vehicles by 2025.

(VW Identifies a new direction with I.D. battery car. Click Here to check it out.)

VW is teasing a new electric vehicle concept that will debut at the Detroit Auto Show next month.

As with the new Chevrolet Bolt EV and the Tesla Model 3, VW is talking long-range electric. The Paris show car was said to deliver anywhere from 250 to 375 miles per charge using a whopping 125 kilowatt-hour lithium-ion battery pack. To put that into perspective, that’s 25% larger than the pack in Tesla’s latest Model S, the P100d.

The Paris concept squeezed that battery in under its load floor, so that would suggest that an electric microbus could manage an even larger pack that, despite its added mass and poorer aerodynamic profile, would give it roughly equal range.

“Its overall concept is revolutionary,” proclaims the VW release. “It combines ample space for travel with a long electric driving range, to usher a new feeling of freedom – with zero emissions – and a new era of mobility. 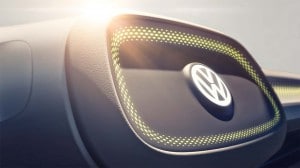 VW appears to be sticking to its guns when it says its rolling out 30 new EVs by 2025.

The front-end teaser suggests that the I.D. van would share the flat-nosed shape of the classic Microbus. The challenge, were VW to try to put it into production, would be meeting tough crash standards with relatively little room for a front end crumple zone. That led VW to kill off another attempt at reviving the Microbus a decade ago.

This isn’t the first time VW took a shot at electrifying a van concept. It took a similar approach when it revealed the BUDD-e during the Consumer Electronics Show in Las Vegas last January. That model also featured an array of high-tech safety and communications systems, including gesture controls and a wall-sized video display.

We wouldn’t be surprised if the I.D. van includes similar features – and autonomous, perhaps even driverless motoring technologies.

(To see more about VW stretching the range of its e-Golf, Click Here.)

We’ll get a better sense of what VW has in store during the maker’s NAIAS news conference on Jan. 9.