Automaker in talks with regulators about 3.0-liter diesels. 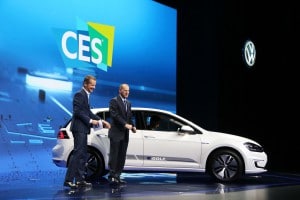 VW boss Herbert Diess, left, must finalize the company's economic plans for the next five years as VW works on another diesel settlement in the U.S.

Volkswagen AG appears to be at the precipice of a settlement on its 3.0-liter diesel engines that were part of its emissions scandal last year. Meanwhile owners of 2.0-liter diesels are lining up in droves to accept VW’s buyback offer from the recently completed settlement.

The buybacks are part of a $14.7 billion settlement agreement hammered out by VW and federal and state regulators in the wake of the automaker’s admission that it cheated on diesel emissions testing in the U.S. and around the world.

Sharon Nelles, the German automaker’s attorney, told U.S. District Judge Charles Breyer in San Francisco that more than 370,000 people have signed up on the settlement website and almost 200,000 of those submitted claims, describing the response as “exceptional.”

The deal covers about 475,000 Volkswagens and Audis and allows owners to sell their vehicles back to the automaker or get them fixed plus an additional $5,100 to $10,000 each depending upon the age and type of vehicle. A fix for the engines has yet to be finalized.

However, the initial settlement only tackles part of the diesel problem, albeit the significantly larger portion. Breyer noted that VW has made progress in its talks with the U.S. Justice Department and other government agencies toward resolving the fate of about 80,000 polluting diesel 3.0-liter vehicles.

He set a Dec. 1 deadline for a status update on the talks and said he is “very optimistic” an agreement will be reached. In those talks, Volkswagen submitted proposals to fix larger Porsche, Audi and Volkswagen diesel vehicles.

The two sides are also working out how much to compensate the owners of these larger, more expensive vehicles. Reuters reported that sources believe VW may agree to buy back at least 21,000 older Volkswagen Touareg and Audi Q7 diesel vehicles and might only offer to repair the 60,000 newest ones if regulators agree, but no final agreements have been reached.

VW would have to spend billions of dollars more if forced to buy back all of the larger, more expensive 3.0-liter vehicles, including the diesel Porsche Cayenne, Audi A6 Quattro, A7 Quattro, Audi A8 and Audi Q5.

Adding to the intrigue is the fact that Volkswagen’s board is expected to meet on Nov. 18 to finalize the company’s financial plans for the next five years. With the ongoing payouts, cuts will need to be made to keep VW profitable, but wielding that budget-cutting scalpel is never easy.

In fact, the number of issues facing the 20-member panel that makes the decisions has forced an earlier gathering to sort through some of the problems, including budget goals, job cuts, model strategy and the high cost base of German factories, according to two sources close to the supervisory board Reuters reported.

In addition to the budget, the company must determine how to implement its much-publicized plans to bring 30 new electric vehicles to life by 2025, including where these vehicles will be built, what markets they’ll go to and how much the company will spend on development and production.

To make some of that happen, VW chief Herbert Diess wants to cut costs by $4.10 billion by 2021, however, the company’s powerful works council, whose members occupy almost half the seats on the supervisory board, have said they will not back any budget cuts without a commitment from management to fixed targets and quotas for products, output and investment, Reuters noted.

Making any workforce cuts may be difficult as the automaker recently announced it would be dropping 25,000 workers from its ranks in the next decade. However, the reductions are coming through attrition only, not layoffs or plant closures.