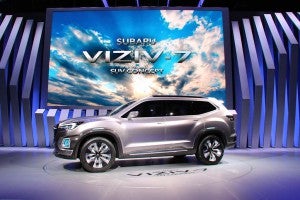 Subaru is best-known for rock-solid reliable all-wheel drive vehicles with distinctive styling, although the last part isn’t always complimentary, depending on who is saying it.

However, its new Viziv SUV concept at the Los Angeles Auto Show has tongues wagging about its distinctive stying … and it’s all good.

The Japanese maker unveiled the new sport-ute concept to look at the “future vision of car development” for the “enjoyment and peace of mind” that Subaru wants to provide to customers, the company noted.

With the Viziv-7 SUV Concept, Subaru is demonstrating its thinking about how big a future Subaru SUV can be. 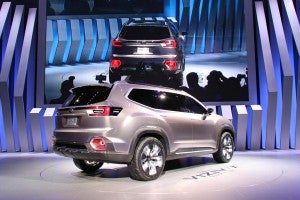 The Viziv-7 will be the design template for Subaru's large SUV coming for 2018.

“We know customers in this segment want a full-sized vehicle and the next 3-row from Subaru will be the biggest Subaru vehicle ever.”

Contrary to the current trend of adding smaller utility vehicles, Subaru needed a behemoth at the top of its line-up. At 204.7 inches long and 79.9 high, the Viziv fits the bill. In fact, it’s larger than a Ford Flex and nearly the size of a Ford Expedition

(Check out the major debuts coming to the L.A. auto show, Click Here.)

The only SUV Subaru offers now is the Forester, and it’s at the small end of the segment. Given the strong sales of larger SUVs – more than 1.5 million thus far this year – Subaru was missing out on a big profit center. 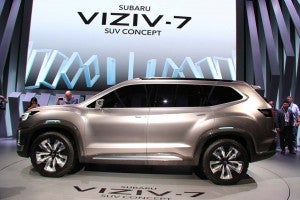 Unlike most automakers, Subaru actually need to build a large SUV, and this is the blueprint.

Subaru “has one of the best brand-loyalty ratings out there,” Karl Brauer of Kelley Blue Book told AutoBlog.com. “But they don’t have any three-row vehicles. This way they’ll at least maintain the family buyers who are already loyal to the brand who’d otherwise go shopping elsewhere.”