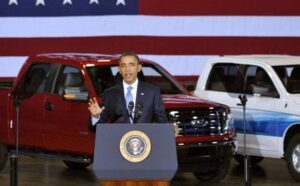 President Obama is trying to keep the tough 54.5 mpg CAFE standard agreed to by automakers in place after his administration ends next year.

In what could be one of the Obama Administration’s last critical decisions on the environment, the Environmental Protection Agency has decided not to change the tough, 54.5 mile per gallon Corporate Average Fuel Economy, or CAFE, standard phasing in between now and 2025.

The announcement comes despite strong opposition from an auto industry having to adjust to a market moving away from passenger cars to less efficient pickups, utility vehicles and other light trucks. And it raises the question of whether the incoming administration, led by a president-elect who has questioned the reality of climate change, will step in after it sweeps into office in January.

Officially, the EPA will continue taking comments through Dec. 30 as part of a so-called mid-term review of the mileage regulations enacted under President Obama, but in a conference call with reporters, Janet McCabe, EPA’s acting assistant administrator for the Office of Air and Radiation said EPA chief Gina McCarthy’s “judgement is now is not the time to introduce uncertainty by changing the standards.”

First enacted in the 1970s, in the wake of twin Mideast oil shocks, the nation’s mileage target stayed relatively flat through the George W. Bush Administration. Then, in a series of moves originally hailed as examples of industry-government cooperation, they were raised twice, with the latest increase beginning to phase in with the start of the 2017 model-year.

For the latest models, automakers will need to deliver an average of around 34 mpg for both cars and trucks. But that is set to increase to 54.5 mpg by 2025. Actually, the real-world figure is somewhere in the low to mid-40 mile per gallon range due to various credits and adjustments, but even that number has generated strong opposition from the industry and its supporters.

“This extraordinary and premature rush to judgment circumvents the serious analysis necessary to make sure the … standards appropriately balance fuel efficiency, carbon reduction, affordability and employment,” declared a statement from the Alliance of Automobile Manufacturers, the industry’s Washington lobby.

No one is certain what President-elect Donald Trump will do about CAFE standards when he takes office.

“It is deeply disappointing that 11th-hour politics in a lame-duck administration has short-circuited a data-driven process for developing regulation,” echoed Ziad Ojakli, Ford Motor Co. group vice president of government and community relations.

In his own statement, Ojakli sad the industry is “ready to work with the next administration and Congress to find a way forward.” What that means is uncertain, though CAFE opponents believe they will receive a much more sympathetic ear from a new president who has expressed strong interest in supporting both domestic oil and coal production.

One of President-elect Donald Trump’s key policy advisors, John Mashburn, has said the incoming administration would launch a “comprehensive review” of all federal regulations, including CAFE.

But pushing back on the mileage rules could also generate plenty of controversy. While there is ongoing public debate about the realities of global warming, there is overwhelmingly positive support for improved fuel economy, according to consumer opinion surveys.

Proponents were quick to argue that the EPA is keeping the country – and the auto industry – on track. “The benefits of these standards are enormous,” said a statement from the Union of Concerned Scientists. “New vehicle fuel economy is at an all-time high. We can’t afford to lose the progress we’ve made.”

One of the questions the EPA had to grapple with was how much the tough new standards would cost and how much of that would be offset by lower fuel bills.

The Center for Automotive Research, in Ann Arbor, Michigan, argues that motorists will pay thousands of dollars extra by 2025 for diminishing returns. The UCS analysis counters that CAFE has already saved as much as $33 billion at the pump. Backers contend that not only do motorists use less fuel but also the decline in demand for oil is a key reason why a gallon of regular currently is going for barely $2, or barely half its prior peak.

What does seem certain is that automakers will have to keep pressing harder to meet the 2025 standard, and most vehicles that come to market a decade from now are expected to use some form of electrification to stay on target, everything from microhybrids to full battery-electric drivelines, as well as other alternatives like hydrogen fuel-cells.