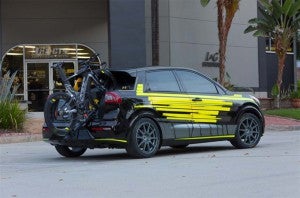 Kia is bringing four autonomous vehicle concepts to SEMA, including the Niro Triathlon, which aims to let elite athletes travel comfortably between events.

Like it or not, the age of autonomous driving is fast approaching. And that eventually will mean more than just letting a motorist take hands off the wheel. It could mean some major changes in the way tomorrow’s cars are engineered, with interiors designed to let you do other things while on the road.

Kia is exploring some of those options with a set of four new concept vehicles the Korean carmakers put together for this year’s SEMA show in Las Vegas. These range from an autonomous off-road SUV to a mobile recording studio.

“This year’s SEMA show gives us the opportunity to ponder what the future of living the autonomous life may one day resemble,” said Michael Sprague, executive vice president and marketing chief for Kia Motor America.

Not everything will go autonomous, at least not in the immediate to midterm future. So, a fifth Kia SEMA concept, the Telluride, explores what it might be like for the brand to move even more upmarket in the SUV segment. A sort of K900 for the utility vehicle market, perhaps. 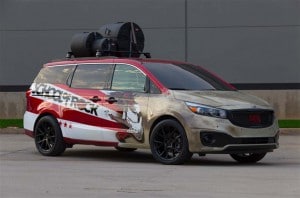 The Kia School of Rock Sedona is a rolling recording studio featuring everything aspiring musicians crave.

Let’s start with a look at the four autonomous Kia Concepts:

The Kia Niro Triathlon starts out with the maker’s new hatchback, a unique model that will only be offered in hybrid and plug-in form. Here it becomes a “crossover-utility lifestyle vehicle,” says Kia, designed to let elite athletes travel the “long, lonely road” between events.

There’s a built-in road-racing bike rack, and a bed to sleep in while the Niro Triathlon keeps rolling towards your destination. It also features a laser bake lane light that could illuminate your path, the self-driving vehicle setting the pace ahead. A built-in tablet computer would then let you analyze your stats.

The doors and hatch have been modified for easier entry and there are plenty of custom cabinets, even a portable shower. And, says Kia, “With no reason to drive, the athlete is cosseted in an ultra-comfortable Human Touch zero gravity ergonomic reclining chair” to relax between races and training sessions.

Today’s high-power car audio systems can blast out tunes at high decibels. But if your vehicle is doing the driving for you, why not make some noise of your own with the Kia School of Rock Sedonaconcept? This modified minivan was developed in partnership with the School of Rock – which served as inspiration for a 2015 Kia SEMA concept vehicle, as well. 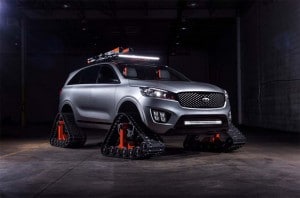 The latest, autonomous concept is a “rolling recording studio (that) features everything aspiring musicians crave: a studio, a place to chill and a completely hands-free way of transporting the band to the next gig,” Kia explains.

Among the custom touches, the driver-side B-pillar has been removed, along with the steering assembly and gear selector, turning this into a fully driverless minivan. That also creates room for a digital mixing board and dual flat-screen monitors for recording tracks. There’s a boom microphone hanging off the ceiling. And, of course, plenty of acoustic insulation to reduce exterior noise.

(FCA rolls out custom Jeeps, utes and minivans for SEMA. Click Here for a look.)

With the Sorento Ski Gondola, you can climbs to new heights, Kia suggests. This heavily modified version of the maker’s familiar SUV replaces its wheels with four snow-ready tracks which “make this gondola a go-anywhere cold-weather machine.”

There’s also a custom metal roof rack for storing skis and poles, with the cargo area tweaked to maximize space for boots, bags and other accoutrements. The floor was also given a high-durability, waterproof finish so you don’t have to worry about tracking in ice, snow or mud.

The Soul First Class, meanwhile, is meant to handle the jungle – the urban jungle, that is. Kia describes it as “an upscale inter-city chariot that lets business travelers work and relax as they journey to out-of-town meetings and destinations.” 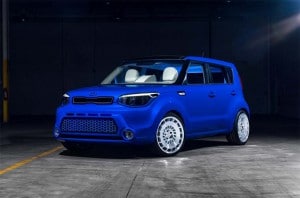 The Soul First Class an upscale inter-city chariot that lets business travelers work and relax as they journey to out-of-town meetings and destinations.

With no need for a driver, it has a completely redesigned dashboard with two integrated, rear-facing seats. There’s a 40-inch Samsung LED TV and a Mac mini computer, as well as speakers throughout the cabin. Tap the motorized center console and two tablets pop up, as well.

“To match the first-class electronic system is first-class comfort with white and gray leather with diamond stitching throughout the cabin, and modern gray wood flooring to match,” Kia continues.

(Chevy screams into SEMA with COPO Camaro, other muscle car concepts. Click Here to check them out.)

While it isn’t designed to be driven autonomously, the maker’s fifth SEMA concept, the Kia Telluride, does provide a hint of what could be coming in the near future. It would move beyond the current Kia crossover mix, and boast a more upscale, three-row, seven-passenger interior.

“Purely conceptual, the Kia Telluride is based on an existing platform and reveals the brand’s interest in potentially offering a premium SUV positioned above the current hot-selling Sorento,” the company explains.

While adopting a more classic SUV shape, the Telluride does boast some intriguing details, including the rear-opening “suicide doors,” black leather captains chairs that also include smart sensors to capture “vital health information.” There are foldaway footrests for that business jet level of comfort. The data can be displayed on interior door-mounted video displays. 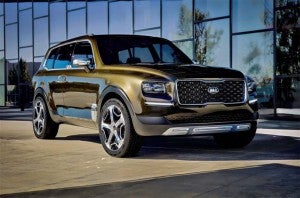 While not autonomous, the Kia Telluride is an exercise in what is to come from the maker design-wise.

And to help reduce stress, the Kia Telluride Concept features a Light Emitted Rejuvenation system, a large, wing-shaped LED panel below the sunroof that displays what Kia calls a “pattern of therapeutic light to treat desynchronosis (jetlag) and improve the passengers’ energy levels.”

While we’re not sure that feature will show up in a production model anytime soon, we’d be more confident in predicting Kia’s intent to add a larger, more luxurious SUV to its line-up, a ute counterpoint to its big K900 sedan.