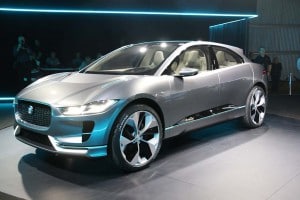 Jaguar has been shaking things up since being sold to India’s Tata a few years back. The 2017 model-year brings the debut of the F-Pace, the British marque’s first sport-utility vehicle. And it won’t be the last, though the Jaguar I-Pace will push a very different boundary.

Making its official debut at the Los Angeles Auto Show this week, the Jaguar concept is a thinly disguised version of its first battery-electric vehicle, a long-range, high-performance SUV set to reach showrooms in late 2018.

The British marque isn’t simply stuffing batteries and electric motors into an existing platform, however. The Jaguar I-Pace Concept reveals a distinctive, cab-forward design meant to maximize the benefits of battery propulsion. That means neck-snapping acceleration as well as “class-above” passenger and cargo space.

“Electrification gives us the opportunity to tear up the rulebook,” said Ian Callum, Jaguar’s design director, during a media background briefing ahead of the official I-Pace debut at the L.A. Auto Show. “It allows us freedom of design like never before.

While it picks up on some of the brand’s familiar design cues, such as its rectangular grille, you won’t confuse the I-Pace Concept for any other Jaguar on the market, whether the F-Type sports car or the F-Pace SUV. 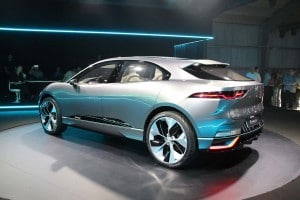 The I-Pace Concept won't be confused with any other Jaguar on the market, whether the F-Type sports car or the F-Pace SUV.

The design eschews the marque’s traditional, long hood – or bonnet, as the British prefer – in favor of a cab-forward shape that is more in line with some exotics. That makes sense, explains Callum, because there’s no engine up front, nor a transmission to create a hump down the center of the vehicle. Instead, Jaguar designers and engineers were able to free up space for five long-legged adults and 17.7 cubic feet of cargo space with the rear seats up.

While the concept has the height and width of a crossover-utility vehicle, its slippery design delivers an almost sports car level of aerodynamics, with a drag coefficient of 0.29. That helps improve both the range and performance of the I-Pace.

(Ford scales down with new EcoSport SUV. Click Here for the details.)

Like the Tesla Model X and some of the other battery-electric vehicles now coming to market, Jaguar opted for a skateboard-like platform, with the batteries mounted in the load flood and becoming a structural part of the I-Pace. There are two electric drive units, or EDUs, one for each axle. Together, they punch out a solid 400 horsepower and a full 516 pound-feet of torque. To put that into perspective, that’s in line with what the F-Type SVR model delivers. 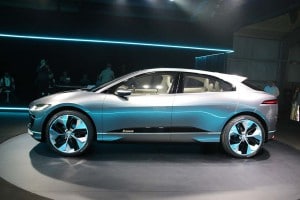 The concept has the height and width of a crossover-utility vehicle, its slippery design delivers an almost sports car level of aerodynamics.

“The bottom line is this SUV will be fast,” said Vehicle Line Director Ian Hoban, launching from 0 to 60 in barely four seconds.

The propulsion system’s through-the-road all-wheel-drive layout will allow for torque to shift front or back, as needed, depending upon road conditions and driver demand.

The two EDUs will draw power from a 90 kilowatt-hour battery system – the same as a Tesla Model X P90d. It’s made up of 36 lithium-ion modules that are liquid-cooled to both ensure battery life and minimize charging times.

With a so-called Level 3 400-volt DC charger, the package would be able to get an 80% “refill” in as little as 30 minutes, and Jaguar has reserved the capability of connecting to the even more advanced Level 4 systems now under development. They could bring recharging speeds not much longer than it takes to fill up a gas tank.

With a full charge, Jaguar expects a minimum 220 mile range using U.S. EPA testing procedures, and a third more by the European standards. That number could go up as work continues on the final production version of the I-Pace. 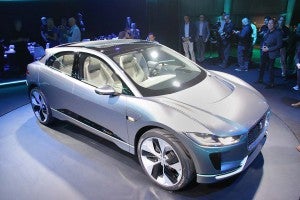 The I-Pace puts out 400 horsepower and a full 516 pound-feet of torque with a 0-to-60 times of barely four seconds.

Unlike Tesla, Jaguar will offer only one battery pack at launch, though Wolfgang Ziebart, who manages the propulsion system development program, said optional packs might be offered in the future. He also noted that with lithium batteries improving their energy density – the amount of power they can store in a given mass – by 7% a year, Jaguar could boost range substantially over the coming years. The alternative would be a smaller, lighter pack.

Jaguar is holding back a number of details – including the supplier providing the battery pack, as well as its price target. But Holban said Jaguar is well aware of the growing competition in the battery-car space. Rival Audi has its own performance SUV coming about the same time the production I-Pace will reach showrooms. And Porsche is bringing out its Mission E sports car about the same time. Other up-market makers entering the segment including Mercedes-Benz, BMW and even Aston Martin.

Electric vehicles have been slow to gain traction in the global market, but a forecast by IHS Automotive suggests that more than 3 million a year will be sold by 2023. And component supplier BorgWarner last week forecast the number could actually go twice as high – even if the new Trump Administration decides to eliminate the 54.5 mpg U.S. mileage target and the country’s $7,500 EV tax credit.

“Our view is that electric cars are here to stay,” said design chief Callum. If anything, he and other Jaguar officials noted, European and Chinese regulators are set to boost rules that would encourage faster electrification in a bid to curb air pollution and global warming.

Jaguar plans to show a production version of the I-Pace “later next year,” said Callum, while the production model “will be on the road in the second half of 2018.”