New systems to phase in over coming two years. 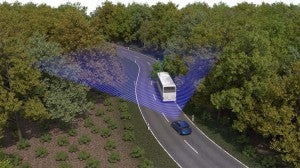 Ford's Evasive Steering Alert will help a driver not just stop but steer around obstacles.

Ford plans to roll out an assortment of advanced systems over the next two years designed to make driving simpler and safer, among other things helping prevent the sort of deadly crashes that occur when motorists turn the wrong way on a limited-access highway.

The new tech features are also meant to take Ford’s current auto-park system and make it even easier and more flexible. Ford’s push puts it in line with what key competitors are doing as they move ever closer to launching the first fully autonomous vehicles. Ford has gone as far as promising to have its first completely driverless model in production by 2021.

Some of the features Ford plans to add help it catch up to the competition – Nissan’s Infiniti brand already has paired automatic braking with cross-traffic alert. It stops the car automatically if it senses an obstacle behind the vehicle or traffic approaching from the side.

(Audi R8 set to become first car in US with laser lighting. Click Here to check it out.) 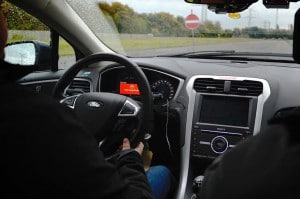 Camera and GPS technology help alert a driver who might turn the wrong way on a highway.

But other additions to the Ford portfolio break promising new ground, such as its evasive steering assist. Using both onboard radar and artificial vision, it can detect, , for example, a parked or stalled car that might lead to a collision and then help the driver steer around it.

One of the more intriguing systems Ford plans to add is simply called Wrong-Way Alert. Drivers often turn the wrong way onto a divided roadway because they’re drunk, impaired or suffering a medical emergency. But it’s also possible to simply miss a “Do Not Enter” or “Wrong Way” sign.

Luckily, the windshield-mounted camera Ford’s system uses never blinks. Paired with GPS mapping data, if it senses you’ve entered the wrong side of the highway it will fire off a series of visible and audible alerts – though it won’t actually attempt to stop your vehicle or steer it to safety.

While trying to park isn’t necessarily a threat to your safety, it can be a challenge, especially in tight urban situations. Ford was one of the first makers to add technology that could automatically parallel park the vehicle with only minor driver involvement. It later added diagonal parking capabilities. It is now enhancing the technology with an improved camera system.

(Will the new Fisker EMotion be an electric vehicle game changer? Click Here to see why it might.)

“Parking is one of the most stressful experiences behind the wheel, and drivers struggling to find suitable parking spaces in urban areas can impact traffic flow,” said Dirk Gunia, supervisor, driver-assist electronics, Ford of Europe. “Technologies like enhanced active park assist will help drivers feel confident about parking in spaces they might otherwise consider too small.” 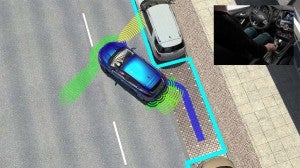 Ford says it is enhancing other existing safety systems, as well. It’s adaptive lighting technology will soon be able to spread out that headlight beam when you approach an intersection or enter a roundabout to make it easier to see – and to be seen by oncoming traffic.

The maker is also picking up a technology first introduced on the latest Mercedes-Benz S-Class. It uses infrared sensing to spot pedestrians on dark roads and then highlights them with the headlights.

Ford also plans to add a new Traffic Jam Assist system that will fall just short of autonomous driving when the roads get clogged up.

The second-largest domestic automaker recently announced that it wants to skip full autonomy since that would still require drivers to remain alert and ready to intervene in the event of an emergency. Global product and tech chief Raj Nair said Ford fears that after long drives with nothing to do, a motorist simply couldn’t respond quickly enough if something were to go wrong.

Instead, Ford has said it believes the real solution is full, driverless technology that will control the car under all circumstances. The maker plans to debut that technology in 2021. Initially, it will target ride-sharing services like Uber, as well as delivery services. But it plans to have the technology available for retail buyers before the end of the coming decade.

(Troubled airbag supplier Takata may be ready to file for bankruptcy. Click Here for the latest.)