Fields says Ford won’t back off of Mexican manufacturing. 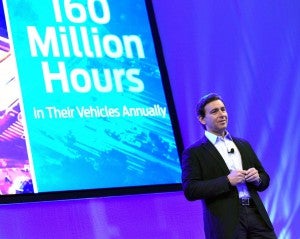 Ford CEO Mark Fields during the keynote address for the L.A. Auto Show warned that a hefty tariff on Mexican-built cars could harm the U.S. economy.

Ford Motor CEO Mark Fields warned that President-elect Donald Trump’s proposed trade plans – which include a 35% tariff on motor vehicles imported from Mexico – would have a “huge impact” on the entire American economy, not just the auto industry.

Though Fields said Ford has “had conversations with the transition team” for the incoming president, his comments, made during a keynote speech marking the opening of the 2016 Los Angeles Auto Show, could escalate a sometimes sharp dispute that began early during the election campaign. It was touched off by Ford’s announcement it would shift small car production from U.S. plants to a new factory in Mexico.

“We’ve got to keep (factories) here. It’s not that hard to do,” then-candidate Trump said during one campaign interview, adding that if Ford and other makers continued to expand in Mexico, “pretty soon all we’re going to have is nursing home jobs.”

Earlier this year, Ford Chairman William Clay Ford Jr.  met with Trump to discuss what the great-grandson of company founder Henry Ford described as “infuriating” attacks. Ford executives stressed that they were replacing production of slow-selling small cars like the Focus with high-demand light truck models such as the F-150 pickup.

That failed to quell the dispute, the idea of tearing up trade deals such as NAFTA and a yet-unapproved Trans-Pacific pact becoming a critical component of the Trump campaign. There have been some signs that the New York businessman might pull back from such tariffs, though with the transition process reportedly in turmoil it has become difficult to tell precisely where the next administration will position itself once in office.

Ford CEO Fields used his keynote speech to send a message that aggressive anti-trade moves would be risky, telling reporters and industry officials gathered in downtown Los Angeles that, “A tariff like that (Trump has proposed) could have a huge impact on the U.S. economy.” 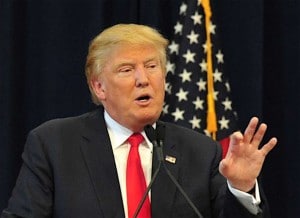 During the campaign, Trump threatened to put a 35% tariff on vehicles Ford built in Mexico and then shipped to the U.S.

Fields tried to soften the tone of his comments, adding that there have been meetings with the transition team, and that, “we look forward to working with a new administration and the entire newly elected Congress.”

But free trade is a must for Ford, he added, Fields indicating that the second-largest U.S. automaker doesn’t intend to back down from plans that it has, in the past, said are necessary to delivering an acceptable return on investment.

In fact, just hours before Fields delivered his morning keynote, Ford announced another move that could lead to further friction with Washington. The carmaker says it will begin selling a new entry-level SUV in the U.S. in 2018, with the little EcoSport coming off an assembly line in India.

That would mark the first time a major manufacturer has imported an Indian-made automobile, but others may follow – along with one of that country’s biggest local producers, Mahinda & Mahindra.

But Mexico, in particular, has been in the crosshairs for Donald Trump. The country has experienced explosive growth in its carmaking sector in recent years, becoming one of the five largest automotive manufacturing nations in the world.

Just this week, Toyota broke ground for a new assembly plant in the state of Guanajuato that will produce the world’s best-selling vehicle, the Corolla. New plants run by Kia, Audi and Nissan’s Infiniti brand went into production in recent months. 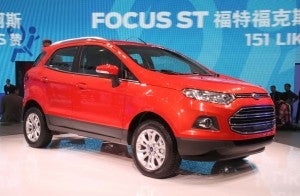 Importing the new EcoSport from India is likely to complicate talks with the Trump administration.

Industry planners say that low wages are only a part of the appeal. They also point to the need to balance operations around the world, sometimes shifting production bases to both keep plants operating efficiently and holding down costs.

“The automotive business is truly global. So, to make this whole thing work, you have to have a relatively free flow of components and vehicles across borders,” said Joe Phillippi, head of Auto Trends Consulting. “It’s how you keep the costs down.”

Other automotive insiders have begun weighing in, though cautiously, many worried about going on the record and getting off on a bad foot with the new administration.

“I am sure free and fair trade is a better way for all of us,” said Ralf Speth, CEO of British-based Jaguar Land Rover. Though the German-born executive insisted he was not criticizing Trump, or any specific U.S. trade plans, he stressed his belief that trade barriers “only make things more difficult and, at the end of the day, this takes buying power away from the people.”