FCA Rolls Out Custom Jeeps, Utes and Minivans for SEMA

There's even a rolling beer hall. 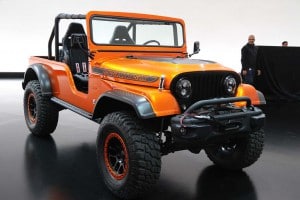 Didn’t have enough Halloween to make you happy? Well, the folks at Fiat Chrysler Automobiles have pulled off some intriguing tricks to deliver an assortment of treats as the annual SEMA Show opens in Las Vegas.

Customized by the MOPAR parts and accessories division, FCA has unveiled six intriguing concept vehicles covering the gamut from minivan to crossover, muscle car to SUV. There’s even a rolling barroom that would be the ultimate way to go tailgating.

With two of the SEMA Show Cars, MOPAR has used a little wizardry, combining both old and new parts and components to create a pair of vehicles that are entirely unique. That starts with the Dodge Shakedown Challenger, which starts out with the body of a 1971 Challenger Coupe. But it doesn’t end that way. 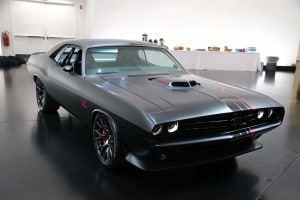 Another blast from the past: the Dodge Shakedown Challenger blends old and new.

(Chevy screams into SEMA with COPO Camaro, other muscle car concepts. Click Here to check them out.)

The front end is classic Challenger, down to the basic body-on-frame platform. But it gets a grafted-on 2017 Challenger rear, as well as a very modern 485-jp 6.4-liter Hemi V-8 engine driving 20-inch rear wheels. There are 19s up front.

With its muted gray paint and shaker hood, this mean machine also had its body smoothed and subtly contoured. The side markers have been removed, the drip rails shaved off. There are no obvious door handles, either. And the gas cap has been moved to the trunk.

“Every square inch of this car has been massaged,” says MOPAR design chief Joe Dehners.

FCA also went back to the future for the Jeep CJ66. If there’s a bit of retro to the look, no surprise. The name offers the clue: it started out with the body of the classic 1966 Jeep Wranger CJ. It was paried with a more recent vintage TJ Wrangler platform – that generation running from 1997 to 2006. To complete this hybrid, you get current-generation Wrangler JK headlights and bumpers. 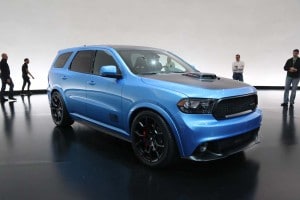 Shake it up Baby...with the Dodge Durango Shaker concept for SEMA.

The windshield was cut down by two inches, meanwhile, and the engine moved two inches forward.

We’re tempted to continue the Halloween theme by calling this a Frankenstein’s monster, but in its Copper Canyon paint with matching black accents, it’s more like what the pumpkin might have turned into if Cinderella was going to an off-road ball.

Inside, you get a pair of seats pulled from the Dodge Viper sports car, as well as a roll cage.

The Shakedown Challenger isn’t the only bad boy among FCA’s SEMA lot. There’s also an untamed take on the familiar Dodge Durango, complete with a “fully functional” shaker hood to give its 392 Hemi the opportunity to breathe. That’s further enhanced by a honeycomb grille, rather than the traditional Dodge crosshair. At the back end there are five-inch exhaust tips.

The Dodge Durango Shaker concept has been lowered three inches and rides on MOPAR’s 220unch wheels. 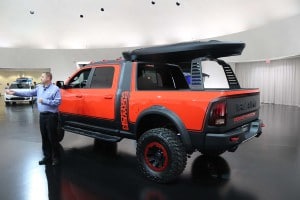 The already beefy Ram pickup muscles up as the Ram Macho Wagon Concept.

Inside, there are six buckets, Dehner joking that, “We bought all the Viper seats we could find” for this year’s SEMA concepts.

The seating is a bit more conventional in the Ram Macho Power Wagon, though Dehner admits it’s a bit of a “cartoon.” But one that hints at some of the parts and accessories that are either already in the MOPAR catalogue or which could soon be added.

That includes a “conceptual” front bumper and hood combination that includes such macho accessories as an integrated winch and tow hooks. The Macho pickup gets larger wheel flares, 37-inch OD off-road tires, and other heavy-duties tweaks and features, including running boards.

Under that big hood: a 6.4-liter Hemi beefed up with cold-air intakes and a custom exhaust system.

A “sport hoop” behind the cabin and a support system in the bed make it possible to carry things like a kayak or paddleboard. 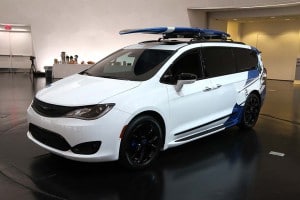 The Chrysler Pacifica Cadence showcases over 100 MOPAR parts and accessories.

The whole package is finished off with what FCA dubs Macho Mango paint and interior trim.

The new Chrysler Pacifica minivan was designed to show you could maintain the functionality that folks love and need while delivering a more appealing exterior design. The Chrysler Pacifica Cadence takes things to another level by adding over 100 different MOPAR parts and accessories, including multi-color wheels, running boards and an asymmetric rear wrap. There’s also a roof rack that, like the Macho Power Wagon, lets you carry things like kayaks, paddle and surfboards.

“We wanted to me it fit seamlessly into peoples’ lives,” suggested Todd Beddik, a senior manager with MOPAR.

The accessory kit includes the expected family-friendly features, from a wireless charging system to a built-in dog kennel. 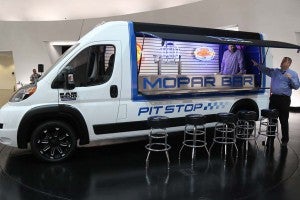 You wouldn't need to make a beer run with a Ram ProMaster Pit Stop parked nearby.

Anyone who has visited the SEMA Show over the years knows just what an overwhelming experience it can be, with several thousand exhibitors taking up several million square feet at the sprawling Las Vegas Convention Center. So, one of the most welcome concepts from FCA just might be the Ram ProMaster Pit Stop.

Start out with the familiar Ram ProMaster van, cut out one side, add a pop-up wall, four stools and you’ve got a rolling bar – complete with four keg taps, the handles made from MOPAR shifter accessories.

Being Sin City, of course, the package wouldn’t be complete without some neon, including a hanging MOPAR logo.

Those Mopar-badged stools store inside when it’s time to head off for your next event.

(Click Here for the latest inside word on the long-rumored mid-engined Corvette.)