Audi Gets Sporty with New A5 and S5 Sportback

Maker continues growth of the line-up with next-gem versions. 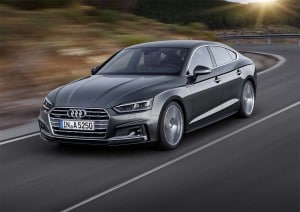 Audi unveiled the 2018 A5 Sportback laden with new technologies at the Los Angeles Auto Show.

Audi’s aggressive product assault continues, the maker giving American motorists a look at three new models at this week’s Los Angeles Auto Show. That includes the completely redesigned Q5, as well as the all-new Audi A5 and S5 Sportback models.

All three models took their first bows at the Paris Motor Show earlier in the annual show season, but U.S. shoppers may find themselves particularly curious about the Audi A5 Sportback as the fastback model is just joining the maker’s American product portfolio for the first time.

As with the standard A5, the Sportback feaqtures the maker’s distinctive singleframe grille, though on the latest Audi models, the face is lower and wider. There’s a bit more sculpting than in past 5 variants, which tended to be rather slab-sided. Add new, wider wheel arches and a broad hood and the overall appearance is more planted and powerful.

From the rear, the Sportback might be confused with the familiar Audi A7, and adds two rear doors to the A5 coupe, as well as a hatch accessing a larger cargo compartment. New, three-dimensional LED taillights are meant to further emphasize the car’s width. 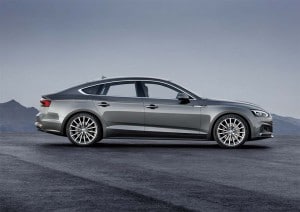 The new A5 Sportback, and its S5 sibling, expand on the previous generation A5's layout.

Audi’s reputation is built, in part, on its reputation for distinctive and elegant interior designs. The new models are no exception. Both the A5 and the S5 Sportback share a number of revisions to the old A5 family layout, including the addition of the Virtual Cockpit instrument cluster. The reconfigurable display can be customized extensively and, among other things, can be used to put navigation information directly in the motorist’s line of sight.

There’s a new layout to the climate control system and trim panels. And both models offer an optional Bang & Olufson premium audio system. There’s in-car WiFi and Audi now offers a new telematics system with a variety of in-vehicle and remote infotainment and security features.

(Click Here to see how Lexus is spicing up the L.A. Auto Show.)

In keeping with the “S” designation, the new S5 Sportback promises plenty of performance. It features an updated version of Audi’s 3.0-liter TFSI V-6 that now makes 354 horsepower and 369 pound-feet of torque. That will let it sprint from 0 to 60 in just 4.5 seconds. The turbocharged engine is now paired to an eight-speed Tiptronic gearbox with paddle shifters. 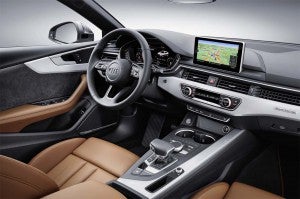 To help ensure all that power gets to the pavement, meanwhile, the Sportback features Audi’s Quattro all-wheel-drive system. Under normal conditions, it sends 60% of the engine’s torque to the rear wheels.

From a safety standpoint, the A5 and S5 Sportback both add adaptive cruise, Forward Collision Warning with automatic emergency braking and other high-tech systems.

The maker is expected to reveal both pricing and fuel economy numbers closer to the official on-sale date for both the Audi A5 and S5 Sportback, both of which will be 2018 models. Look for them in showrooms during the first half of 2017.