Project could take hydrogen power to the front lines. 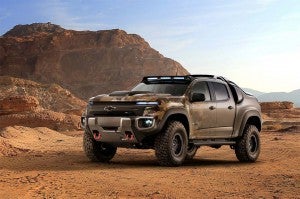 The Chevrolet Colorado ZH2 prototype is a stretched and ruggedized version of the midsize pickup.

By the end of the year, three automakers plan to be selling hydrogen cars in a few select California markets, but General Motors and the U.S. Army are teaming up to see if hydrogen power has the stuff it takes to go to war.

GM and the Army today unveiled a prototype fuel-cell military vehicle based on the Detroit maker’s midsize pickup. Dubbed the Chevrolet Colorado ZH2, the military is looking to see if the technology is not only clean and green, but robust enough for front-line operations. Hydrogen power offers a number of other attractive features, the Army believes.

“Fuel cells have the potential to expand the capabilities of Army vehicles significantly through quiet operation, exportable power and solid torque performance, all advances that drove us to investigate this technology further,” said Paul Rogers, director of the U.S. Army Tank Automotive Research, Development and Engineering Center, or TARDEC, in a statement.

The Colorado ZH2 is more than just another midsize pickup. For one thing, it rides on a stretched version of the chassis used for the street version of the Colorado. It is longer, wider and rides on 37-inch tires that, along with a special suspension, are designed to handle even the roughest terrain. 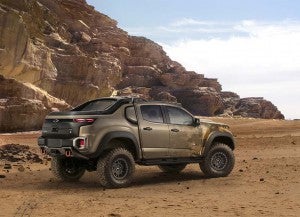 The Army wants a vehicle that is rugged, quiet, hard to spot and produces electricity in the field.

The truck was assembled at GM’s Advanced Vehicle Integration operation at its Technical Center in the Detroit suburb of Warren, Michigan. Testing is getting underway at the automaker’s Milford Proving Grounds an hour away.

The Army wants to know if the truck and, in particular, its hydrogen fuel-cell system, are robust enough to handle tough military assignments. What’s clear is that fuel-cell systems are cleaner and quieter than conventional combustion technology. They also run cooler, which means a smaller heat signature for potential enemies to spot using infrared sensing systems.

Fuel-cells are sometimes referred to as “refillable batteries,” since they don’t have batteries to run down. As long as there’s a supply of hydrogen they can keep running indefinitely, not only powering a vehicle like the Colorado ZH2 as it heads out on a mission but even while stationary, allowing it to provide power for electrical and electronic systems used by troops.

Troops could also get fresh water, as that’s the only byproduct of the fuel-cell process.

“Over the next year, we expect to learn from the Army the limits of what a fuel cell propulsion system can do when really put to the test,” said Charlie Freese, executive director of GM Global Fuel Cell Activities. 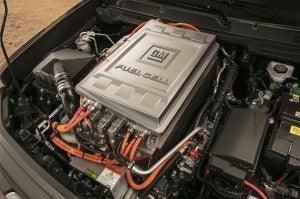 As with civilian fuel-cell vehicles, the ZH2 faces the challenge of finding hydrogen. The lightweight gas is the most abundant element in the universe but it isn’t found in pure form. Instead, it must be produced by cracking hydrocarbon fuels, such as petroleum, natural gas or coal, or by splitting water into its component elements, hydrogen and oxygen.

Electrolyzers, devices designed to do that, could be set up at a base, even a fast-moving mobile unit, however, providing hydrogen for front-line operations. Ironically, getting gasoline or diesel fuel to the battle line can be extremely difficult.

On the civilian front, only a couple dozen hydrogen pumps are currently available in the U.S., most located in Southern California. That’s where sales of the Honda Clarity, Toyota Mirai, Hyundai Tucson Fuel-Cell Vehicle will be largely limited to for the next several years. But efforts are underway to expand availability – and not just in the U.S. Japan, South Korea and Germany are all pushing to create nationwide hydrogen fueling networks.

GM, Mercedes-Benz and several other automakers hope to have fuel-cell vehicles on the highway in the near future.

The Army isn’t the only military service taking a look at the potential of hydrogen power. The Navy is also working with GM on a prototype remote mini-sub that would use fuel-cells to allow it to operate autonomously for as much as two months or more at a time.