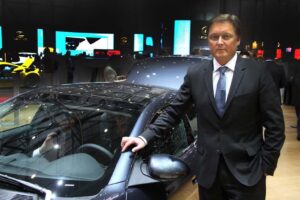 If at first you don’t succeed…

If you’re Henrik Fisker, it seems, the next step is to start yet another car company. Three years after the collapse and bankruptcy of his original effort, Fisker Automotive, the Danish designer is back in business. The new Fisker, Inc. plans to launch a new line of long-range electric vehicles that will rival the likes of upstart Tesla Motors, as well as the more mainstream manufacturers now pushing into the battery-car business.

While specific details are limited, Fisker said the company is targeting a minimum range of 400 miles per charges, something that would allow a driver to go even further without interruption than with all but a handful of gasoline or diesel-powered vehicles.

“This is really the revival of the original Fisker, though it will be a completely new company,” the 53-year-old automotive veteran told TheDetroitBureau.com in an exclusive interview.

Fisker Automotive produced a high-style plug-in hybrid sports car. It came to market about the same time as the Tesla Model S, but a series of setbacks, including several recalls, caused Fisker to crash and burn. It shut down in 2012 and its assets were sold off as part of a 2013 bankruptcy. 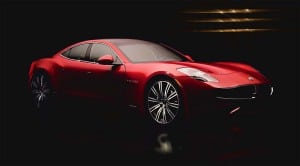 Fisker's earlier plug-in, the Karma, is now being revived by a Chinese maker as the Karma Revero.

In his telephone interview, Henrik Fisker said he learned a lot from that earlier venture, including the need to keep a tight rein over spending. But an even bigger lesson was the need to take control over battery production.

Fisker Automotive’s battery supplier ran into its own series of production problems, triggering some of the carmaker’s most embarrassing setbacks. The company, A123 also went bankrupt and, like the carmaker, was eventually sold to the Chinese.

While the executive wouldn’t offer many details, he noted that he has teamed up with “researchers from UCLA” who have been developing a next-generation lithium-ion battery technology, dubbed graphene, that, among other things, can increase energy-density – the amount of power that can be stored in a pack. 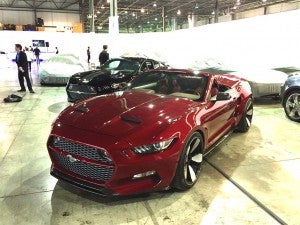 Henrik Fisker is also partnering with start-up VLF to produce the Mustang-based Rocket.

Some prototype graphene batteries have been shown to store as much as five times as much energy in a given mass than conventional lithium-ion batteries. But Fisker, Inc. could become one of, if not the first to bring the technology to market.

According to the Danish designer-cum-entrepreneur, the first vehicle he is developing would use “at least 100 kilowatt-hours of batteries.”

Fisker also said that his new company would be open to selling some of these advanced cells to other automakers through a new subsidiary called Fisker Nanotech. If the technology lives up to expectations, the start-up could find some eager buyers.

After failing to generate much enthusiasm among motorists for the first generation of battery-cars which generally got no more than 100 miles per charge, industry analysts now believe the real market breakthrough will come with ranges exceeding at least 200 miles. Tesla recently topped 300 with the P100d version of its Model S sedan, and when Volkswagen revealed the I.D. battery concept car at the Paris Motor Show last week, it said it may be able to deliver as much as 350 miles range.

Fisker, Inc., will follow a start-up model similar to that of Fisker Automotive, as well as Tesla: starting out by producing a larger model targeting the luxury market and then moving into more mainstream segments. 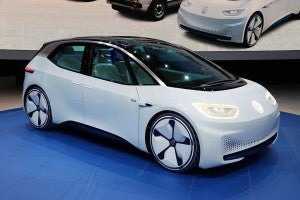 A growing number of mainstream carmakers are bringing out long-range electrics, like this VW I.D.

Henrik Fisker hinted that the first product will be “about the size of a Tesla Model S but with more interior space.”

That would suggest that the batteries – and possibly the motors and other key components — will be mounted below the load floor, freeing up space normally used for the engine compartment.

“Simultaneously,” Fisker added, “we are developing a more mainstream vehicle” that would likely move to target upcoming products like the Tesla Model 3, the Chevrolet Bolt or the Volkswagen I.D.

The goal is to reveal both the new battery technology, as well as a concept version of the first vehicle during the second half of 2017, said Fisker. As to production timing, when asked if 2019 might be the goal, he replied that “This is probably close speculation.”

Fisker declined to discuss any of the financial arrangements for the new company or its subsidiary. He did note that a small production facility for the graphene battery technology is already in place in “Northern California,” and that it could be “ramped up quickly” to higher levels of production.

A breakthrough battery would be a particular advantage in what is becoming an increasingly crowded battery-electric vehicle, or BEV, market. Though these vehicles accounted for less than 1% of total new vehicle sales last year, according to industry data, some experts believe demand will surge over the coming decade – in part driven by tough new government mileage and emissions standards going into effect around the world.

Then there are the start-ups, including Tesla and Chinese-owned Faraday Future. The latter company this week announced it would buy more conventional lithium-ion batteries from Korea’s LG Chem – the same firm supplying batteries for the 200-mile Chevrolet Bolt.

(For more on the mysterious Faraday Future, Click Here.)

As for Henrik Fisker, he has proven himself a resilient fixture of the auto industry. Best known for his design work – among other things, he penned the iconic Aston Martin DB9 – he has tried his hand on the business side a number of times.

He initially created a company that crafted custom bodies for existing luxury cars, such as the BMW 5-Series, before launching Fisker Automotive. Then, two years ago, he partnered with Galpin Motors, a major California car dealer, to develop the Fisker Rocket, a high-performance, customized makeover of the Ford Mustang.

Separately, the original Fisker Automotive recently announced its revival, albeit under Chinese ownership — and a new name. The company itself is now called Karma and the original hybrid will be marketed as the Revero.