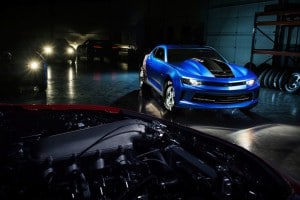 Chevrolet is bringing the thunder to SEMA once again with its new 2017 COPO Camaro: Only 69 will be built.

Forget Halloween. If you’re looking for something scary, take a trip out to the annual SEMA Show in Las Vegas this week to see the latest in high-performance parts and accessories – and a few complete car projects.

Chevrolet is a perennial presence at the Las Vegas Convention Center and it’s back again this year with several Camaro projects designed to put some fear into the competition. That includes a new track-ready concept version of the COPO Camaro that could soon be dominating the drag strip. Chevy is also showing off a variety of concept parts designed to help get weekend racers down the quarter mile in 10 seconds through the Camaro SS Drag Race Development Program.

“From sportsman classes to the pro ranks, Camaro has been one of the most popular cars ever to launch down the drag strip,” said Jim Campbell, GM U.S. vice president of Performance Vehicles and Motorsports. “For 50 years Chevrolet has supported Camaro drag racers and these new SEMA vehicles demonstrate our commitment to the sport, with parts development and the advancement of the historic COPO Camaro program.”

The COPO dates back to 1969, when Chevy set out to make the Camaro a serious contender on the dragstrip. It was actually a backdoor project that got around the limits of the production Camaros of that era. Only about 1,000 were made – and today they’re among the rarest of classic Chevy muscle cars, one selling at auction earlier this year for $455,000.

Chevrolet brought back the COPO in 2012, producing just 69 of them and offering them to potential buyers through a random selection process. The maker will take the same approach for the 69 2017 COPO Camaro’s it plans to release. 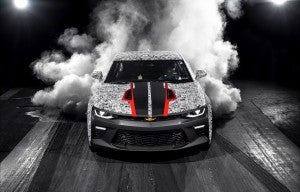 Chevy gets back to its drag-racing roots with the new Camaro SS dragster headed to SEMA.

As with the original COPO and the 2012 edition, the new cars are designed specifically for the NHRA Stock Eliminator class. Each car will be outfitted with a racing chassis and suspension, including a solid rear axle that replaces the production car’s independent rear suspension.

The 2017 COPO Camaro concept debuting at SEMA features a supercharged 350 engine, custom Weld racing wheels and “anodized” Hyper Blue Metallic paint. The show car will go on the block at the Barrett-Jackson Auction in Scottsdale, Arizona, next January, proceeds earmarked for the United Way.

In production, winners of the COPO lottery will be able to choose from three engines, including the supercharged 350, a naturally aspirated 427, and an LT-based direct-injected 376. The hand-built cars will also feature lightweight manual four-wheel disc brakes, a manual steering rack, a fuel cell with a high-pressure pump, and a unique racing harness.

(Click Here for details about the rumored mid-engined Corvette.)

Those picked for a COPO will be notified during the first quarter of 2017.

For those who don’t get in on the fun, they can still get a little action through the Camaro SS Drag Race Development Program. The project is pursuing a variety of ways to push the coupe just a little bit faster. That includes modified differentials with higher ratios, as well as a cam-and-heads package that can punch up the LT1 engine to 530 horsepower – even 600 with a power adder.

One recent prototype managed to clear the traps at the quarter mile in 10.685 seconds, hitting a speed of 125.73 mph.

(Muscle car wars heating up. Click Here for the story.)

“The Camaro SS Drag Race Development concept is a work in progress, but Chevrolet is serious about developing parts and packages tailored for drag racers,” said Dickens.