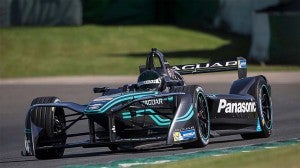 Jaguar will develop its own powertrain for the I-Type.

After a pouting absence following its failure in Formula 1, Jaguar is readying a return to racing, but don’t expect to hear the screech of a new V-10 or turbo engine. Jaguar’s all-new I-Type racer will move in near silence as part of the Formula E series.

The British maker will team up with – appropriately enough – battery and electronics giant Panasonic for the groundbreaking electric racing series. The partners pulled the covers off their new racer today, dubbing it I-Type 1. It will be driven in anger for the first time on October 9th, when the new Formula E season gets underway in Hong Kong.

Considering its long motor sports history, which reached apogee on the circuit of Le Mans with legendary models like the C- and D-Types and, later, the XJR-19, why Formula E. Because, said team chairman Gerd Mauser, it’s “an innovative series with competitive, close racing in front of urban audiences. It develops EV tech and helps change the perception of electric cars.”

For the record, Jaguar has not yet confirmed plans to switch out the gas and diesel engines in any of its street cars for electric motors, but that is expected to happen in the not-too-distant future. So, scoring well on the Formula E circuit would certainly earn the brand some credibility. 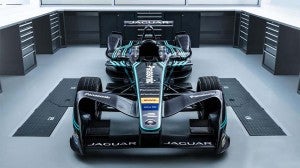 Jaguar will become the third automaker to field a team in the Formula E series, with more expected.

(Is this Robocar the future of racing? Click Here for more.)

At a news conference, Panasonic Jaguar Racing chief engineer Nick Rogers said he expects the Formula E project to pay off in a number of ways:

“Over the next five years we will see more changes in the automotive world than in the last three decades,” said Rogers, who also serves as chief engineer for Jaguar Land Rover. “The Formula E championship will enable us to engineer and test our advanced technologies under extreme performance conditions. We will apply this vital knowledge as part of our real world development.”

When Formula E debuted in late 2014, all teams ran identical vehicles designed and produced by Williams Advanced Engineering. Jaguar comes onboard at a significant turning point. For the 2016-2017 season, teams will now be allowed to come up with their own powertrain systems. 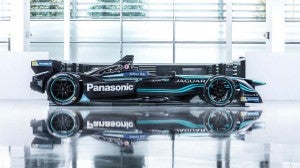 Significantly, series management has also ordered an eight kilogram, or nearly 17 pound, reduction in weight for the coming season, the cars now being limited to no more than 880 kg, or 1,940 lbs.

Jaguar will have some production car rivalry on the Formula E circuit from Renault and DS. And Audi is also rumoured to be getting into the fray as it gets ready to roll out an assortment of its own street electric vehicles starting in 2018.

The Formula E series has been generating quite a bit of buzz, though traditionalists still complain about the lack of engine roar. Under the hardest acceleration, cars like the I-Type will issue a relatively gentile whine, often drowned out by tire and transmission noises.

“We know that the challenge will be strong – our competitors have a two-year head start,” said team director James Barclay.  “We will be keeping our expectations in check in our first season. Ultimately, we’re here to win but we’re here to innovate too.”