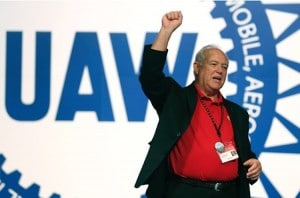 One of the byproducts of the NAFTA agreement was a broad expansion of car and truck production in Mexico.

“Mexico has got eight new plants while they have closed two in Mexico,” one top official in UNIFOR, the Canadian union, which is preparing to negotiate a new labor contracts with General Motors, Ford Motor Co. and Fiat Chrysler Automobile N.V. Those three automakers have steadily expanded their Mexican operations since NAFTA was approved in 1994.

Williams told reporters that he believes Clinton will act to change NAFTA in way that will benefit workers. Trump, on the other, will not, he said.

Reciprocal trade is a two-way street, but the benefits to American workers have been sharply limited because the Mexican government deliberately pursues a strategy of keeping wages in Mexico low, which not only puts American workers at a disadvantage, but also means Mexican workers can’t consume more goods made in the U.S.

“She says it must be re-worked,” said Williams, who said he met with the Democratic Presidential nominee “one-on-one” prior to the UAW’s May endorsement of Clinton. “I’m very comfortable with that,” said Williams, adding that he used Clinton’s personal commitment to persuade a divided UAW board to endorse Clinton rather than Bernie Sanders.

(Click Here for details about GM’s plans to bring truck production back from Mexico.)

“She said she would try to re-do NAFTA,” he said. Williams also said the Obama administration has begun to make changes to the agreement, which has been a target of criticism from UAW leaders – and members – since it was signed 22 years ago.

Williams said Mexico needs an independent labor union that can bargain aggressively for higher wages and benefits. The existing unions in Mexico are too weak and under the government’s thumb, which means they tacitly accept the country’s low-wage policies.

The attack on NAFTA by Clinton from one side and Trump, who has attacked Ford Motor Co. by name for moving jobs to Mexico, on the other, does pose a challenge for automobiles executives who have found the country attractive not only because of its low wages and its proximity and access to markets in the U.S. and Canada, but also throughout Central and South America.

(To see more about Ford’s plans to put $1.6 billion into plants in Michigan and Ohio, Click Here.)

Not only have GM, Ford and FCA invested in Mexico during the past decade, but also so have Volkswagen, BMW, Mercedes-Benz, Nissan, Honda, Toyota, Kia and Hyundai.