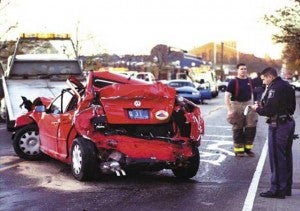 A new study shows that there is a correlation between lenient driving laws and a high rate of driving deaths.

America’s in the midst of the 100 most dangerous days of the year for teenager drivers across the country, and a new study shows that lax driving laws directly correlate to increased traffic fatalities.

Conducted by the Auto Insurance Center, this new study shows that states with least restrictive laws related to teen driving, speed limits and other areas have the highest incident rates.

For teenagers, Wyoming reported the highest rate of deaths for teen drivers and the state has only mild restrictions on teen drivers. However, the next two states on the list, Montana and North Dakota, have some of the least restrictive rules for teen drivers, granting them full privileges at age 16.

In fact, the top five states for teen crash fatalities all have little or mildly restrictive licensing policies for teens. They could lower their stats, according to the National Highway Traffic Safety Administration, by tightening their rules on graduated licenses.

According to the NHTSA, implementing Graduated Driver Licensing can lead to a 20-50% decrease in accidents involving young and inexperienced drivers. Vehicle accidents are the top cause of death for teenagers.

In the broader study, states with few safety restrictions often finished at or near the top of some highly undesirable categories.

(New legal problems for VW as NY and other states file suit. For more, Click Here.)

The top 15 states for restraint-related crash fatalities also have the lowest penalties for failure to buckle up. Again, Wyoming tops the list for accident deaths. Mississippi, Montana, and North Dakota also rank high for fatalities relating to a lack of restraint.

(Click Here to see how a tiny British EV blows the doors off Tesla and the rest of the competition.)

While the law plays a role, there’s another factor at play here. According to the CDC, adults who reside in rural areas are 10% less apt to use seat belts than adults living in suburban spots and cities. Education, family habits, and other factors also influence seat-belt usage.

Wyoming has some of the most lenient speeding laws and the highest rate of speeding-related car crash fatalities. North Dakota, South Carolina, New Mexico, Montana, and North Carolina have mildly restrictive speeding laws and finished second through sixth on the list while Texas, in seventh place, has the least restrictive laws.