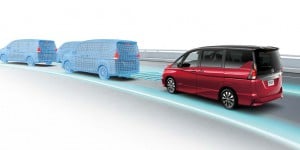 The new ProPilot system goes beyond active cruise control but is not hands-free.

With a goal of launching its first fully self-driving vehicle barely four years from now, Nissan is taking a first big step to get there with the launch of its new ProPilot system.

But the debut of the semi-autonomous technology comes at a potentially awkward moment, rival Tesla Motors taking serious heat for a series of crashes that may be linked to the U.S. maker’s similar Autopilot systems.

It’s perhaps no surprise, then, that Nissan officials put as much emphasis on the limits of ProPilot as they did on the new system’s capabilities during a preview at the company’s headquarters in Yokohama, Japan.

Nissan is considered one of the leaders in autonomous driving research, the automaker latest autumn taking TheDetroitBureau.com for an hour-long drive through heavy Tokyo traffic in a fully hands-off Leaf prototype. And CEO Carlos Ghosn has said the goal is to have 10 self-driving models in production by 2020 through both Nissan and its alliance partner France’s Renault. 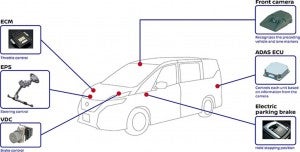 A Nissan schematic shows the components of ProPilot and how they work together.

The plan is to roll out steadily more advanced features in the intervening year, starting with ProPilot. The system is a step up from current active cruise control and forward collision warning with autobrake system. But it pointedly will only allow drivers to take their hands off the steering wheel for a few seconds at a time. If they don’t respond to warnings, ProPilot will automatically disable itself.

In reality, that’s not much different from what Tesla is doing with Autopilot, and the California-based battery-carmaker insists it has warned owners that the system does not offer full autonomy. That hasn’t stopped motorists from pushing the limits, one YouTube video showing a driver activating the system and then jumping into the backseat.

It hasn’t helped that Tesla – and CEO Elon Musk, in particular – has hyped Autopilot as a demonstration of the company’s technical prowess. Critics contend it has not done enough to make the limits clear to motorists. This week, influential Consumer Reports magazine said Tesla has to do a better job of communicating those limits – while also calling on the maker to disable Autopilot until some apparent glitches are fixed. 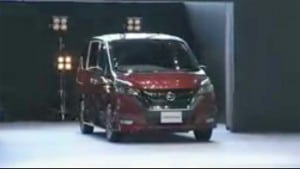 The 2017 Nissan Serena makes its debut at a Yokohama news conference.

The maker has confirmed Autopilot was at least partially responsible for a fatal crash in May. It insists the system was not activated, despite the driver’s claim, when a Model S crashed in Pennsylvania on July 1. A third crash is now under investigation.

Both the National Highway Traffic Safety Administration and the National Transportation Board are probing the crashes and Tesla is now being asked to appear before a Senate committee, as well.

Nissan clearly wants to steer clear of the Tesla headaches. “The driver must assume full responsibility,” stressed Deputy General Manager Atsushi Iwaki added. “It is best to limit the function to helping the driver.”

The second-largest Japanese maker has not yet said when it might launch ProPilot in the U.S. market. And the system will first be offered on one of the maker’s most mundane Japanese models, the Serena minivan, starting next month.

The next step for Nissan will be a system capable of changing lanes and passing other vehicles, likely to come to market in 2018.

That feature is already on the new 2017 Mercedes-Benz E-Class. But, like Nissan, the German carmaker is walking a fine line, boasting about the new model’s capabilities while also stressing its limits. The E-Class will only allow automatic passing on certain roads. And it limits hands-off driving to around 30 seconds.

Mercedes also decided not to activate some features, such as the car’s ability to exit a parking spot with no one onboard. That would put the company into a “gray area” where the rules aren’t clear, said senior executive Bart Herring, referring to the lack of government guidelines.

Expect to see still more makers introduce semi-autonomous technologies over the next 12 to 18 month, but you can also be sure they will be much more clear about the limits of those systems in the wake of the problems Tesla is facing.

(Click Here for a first look at the new Nissan Pathfinder.)