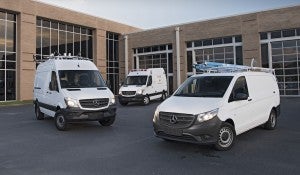 Mercedes-Benz is looking to expand its spot in the newly hot midsize van market with a sub-$30k Metris.

Mercedes-Benz is planning to bring out an additional version of the midsized Metris van as its expands its portfolio of vans that can be used to carry passengers, cargo or tools for under $30,000.

The Mercedes-Benz Van line-up in the U.S. now include the Metris Worker, said Mathias Geisen, the head of MBUSA’s van marketing effort, said during a presentation at the Daimler AG van plant in Charleston, S.C., which is now used to re-assemble vans built in Germany.

Daimler announced last year it intended to build a $500 million assembly plant to make Sprinter vans in the U.S. to take advantage of the expansion of the market for “Euro” vans in the U.S.

Geisen said the competition in the van segment is intense and Ford’s new Transit Van has surged into the market capturing roughly 50% to 60% of the van market, while Mercedes holds 8% to 9% based on current sales even though Federal Express has adopted the Sprinter. Ford has a very strong dealer network that reaches every corner of the U.S., he noted. The Ram ProMaster also has done well.

The cargo version of Mercedes-Benz Metris will start at $25,995, while the passenger version will sell for $29,995.

Geisen said the Metris passenger and cargo vans are right-sized for the American market being larger than Ford’s Transit Connect but smaller than the Chevrolet’s commercial van, the Savannah. The Metris fits into a standard suburban garage, while offering twice the cargo space and payload capacity of the traditional small van. It can carry 2,500 pounds and also is capable of towing 5,000 pounds. 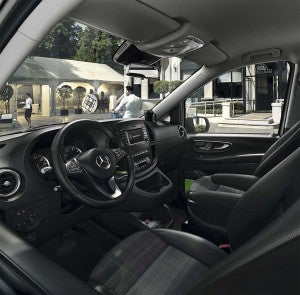 The Metris is the least expensive Mercedes in the line-up starting at just under $30k.

The Metris Worker’s equipment has been simplified but it will also come with a high level of safety equipment, a V6 gasoline engine and seven-speed transmission, which bolsters the vehicle’s fuel economy.

“Based on the excellent demand for the Sprinter Worker models, which Mercedes-Benz rolled out last winter at the Chicago Auto Show, we are excited to announce the expansion of the Worker line-up to include the Metris Worker cargo and passenger vans,” said Bernie Glaser, head of MBUSA vans division.

Daimler AG officials noted that Mercedes-Benz has led a revolution in commercial van market in the U.S. traditionally dominated by General Motors, Ford Motor and what is now Fiat Chrysler.

The introduction of the Sprinter helped popularized the Euro shape and prompted its American competitors to bring out their own tall vans that can be outfitted in dozens of different ways by users in the trades, such as carpentry and plumbing, as well for carrying food and other cargo as well as ambulances.

The Sprinter, which originally was sold by Freightliner and Dodge, became a Mercedes-Benz product after a long debate inside MBUSA about the wisdom of using the three-pointed star on a commercial vehicle. However, Mercedes-Benz sells commercial and luxury vehicles in Europe, Daimler AG officials noted.

Sales of Mercedes-Benz vans in the U.S. have increased six consecutive years and after a double-digit increase in the first half of 2017 should also set a record again this year, Glaser said.

Mercedes-Benz is also working on expanding its sales by offering more options for customizing the vehicles so they fit each customer’s individual requirements.

In fact, Mercedes is introducing what it calls MasterSolutions, a turn-key vocational upfit solution for any van. If a shuttle van built to haul 14 paying passengers is needed or if shelves, racks, cab chassis bodies or refrigeration units are needed, Mercedes has key contractors that handle to upgrade.

(To see the latest news about the FCA sales reporting scandal, Click Here.)

The program takes the guesswork out of the ordering process, creating a seamless buying experience at an authorized Mercedes-Benz and Freightliner dealer.