Other plans, including an electric Sprinter, may be in the works. 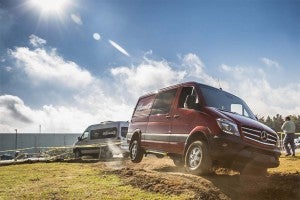 The Mercedes-Benz Sprinter has traditionally been big with contractors, but is gaining demand from e-commerce.

While Daimler AG may best be known for luxurious passenger vehicles like the all-new 2017 Mercedes-Benz E-Class and the SL roadster, there’s another side to the maker’s ledger sheet. It also lays claims to being the world’s largest manufacturer of commercial vehicles, about 850,000 of them last year alone.

And it’s bound and determined to grow that business, starting with the U.S. market. It will clearly help when, in a few years, it will be able to start producing the big Mercedes-Benz Sprinter van from a plant going up on the north side of Charleston, South Carolina. That will end the costly dependence on bringing partially assembled bodies in from Germany and then finish them in Charleston.

The lower costs could help make Mercedes more competitive in what has turned out to be a fast-growing U.S. market for European-style vans. But the maker is also looking at other ways to boost sales. The factory will be flexible enough to assemble the smaller Mercedes Metris van. And the maker is looking at other options, including possible battery-electric versions of those vans.

(Nope, it’s not the newest Smart fortwo. It’s a Mercedes golf cart. Click Here to check it out.)

“We (will) now have the chance to produce the Sprinter van from scratch in the U.S. from this production facility,” said Michael Balke, the head of Mercedes’ truck operations for North America, shortly before he and other company officials, along with a cadre of South Carolina government leaders, posed for the mandatory photo opp breaking ground at the factory site. 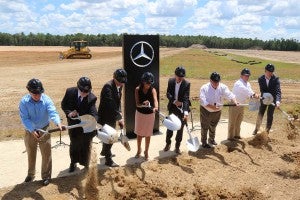 Groundbreaking for the new Sprinter plant.

Mercedes has reason to want those officials, including South Carolina Governor Nikki Haley, on hand. They’re providing extensive financial support on top of the $500 million the automaker is investing in the project. It expects the factory, when completed late in the decade, to create at least 1,300 jobs on-site, with 400 more at supplier operations.

The Sprinter van has been a popular fixture in Europe and other overseas markets for a number of years. It only belatedly launched in the U.S. in 2001 through the heavy truck Freightliner brand, then being added, through the former DaimlerChrysler as a Dodge. After the break-up of that ill-fated “merger-of-equals,” Daimler brought it back under the Mercedes-Benz brand.

Mercedes still has some catching up to do, and part of that is a logistical one. Bringing fully assembled vans in from Europe is a costly solution due to the old, so-called “chicken tax,” which would add a 25% tariff. The alternative has been to bring in partially assembled vehicles, “not a great solution,” lamented Volker Mornhinweg, the maker’s global van chief, because it means putting the vehicles together in Germany, breaking them apart, shipping them to Charleston and then reassembling them.

The new plant will obviate that approach, letting Mercedes assemble the Sprinter from scratch, as it does in a half-dozen other van plants. 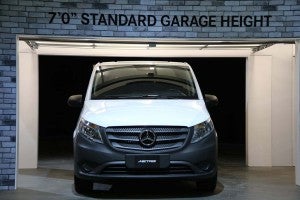 Currently, the smaller Metris van is imported in kit form, but the new plant could eventually build it.

For the time being, it intends to continue importing kits of the Metris van, but Mornhinweg confirmed that the Charleston factory will be “flexible” enough that it could handle the smaller model, as well.

The Metris was only recently launched in the U.S., but Mercedes sees a significant market opportunity running against competitors like the Ford Transit Connect.

For now, Mercedes is being cagey when asked about sales plans, but it clearly is looking to continue the string of double-digit sales gains.

Whether the van market will cooperate remains to be seen, but demand has been strong, overall, in part due to the economic recovery. But there’s also strong interest in the more European-style models, which also includes such products as the Ford Transit and smaller Transit Connect. They make better utilization of space, deliver improved fuel economy and, among other things, tend to have much improved cost-of-ownership figures than classic American vans.

“The market environment has completely changed,” said Matthias Geison, the head of product management for Mercedes-Benz Vans USA. Last year, he noted, those European-style vans outsold traditional American designs for the first time — in part, because those classic U.S. models are being phased out.

The competition, however, is getting intense, with a variety of competitors entering the field.

Mercedes attempts to cover the entire market with over 50 different possible roof, wheelbase, engine and other variations, while also pairing with a number of so-called “upfitters” who can provide even more customization. Meanwhile, it this year launched a new base model, the $32,495 Sprinter Workers, that brings its entry price closer to that of players like Ford and Ram.

Going forward, van chief Mornhinweg noted that pressure will likely grow for still other alternatives, with battery-electric versions of the Sprinter and Metris vans under serious consideration. There has already been interest from “courier” groups, he said, including in Europe Deutsche Post. But companies like Federal Express and UPS have been talking up the idea.

The van side could readily access the electric propulsion technologies being developed for passenger cars, such as the S-Class plug-in hybrid, the van chief said. But, for now, Mercedes is playing it cautiously, studying where both battery propulsion technology is going and whether there will be enough demand to justify launching electric vans.

Company executives said that they likely won’t have such products ready to go until the end of the decade – at the earliest – which would be around the time the new Charleston plant begins to roll out the American-made Sprinter.