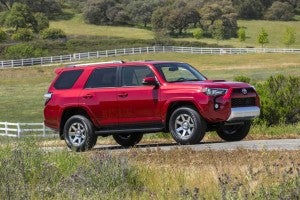 The Toyota 4Runner is one of the models the maker builds still using the suspect Takata airbags.

Stung by critics who revealed it is still using potentially defective Takata airbags in some of its new products, Toyota has told U.S. dealers they must disclose to buyers which vehicles will be subject to recall by 2018.

At least four automakers have continued using Takata inflators in some of their vehicles because of a shortage of new airbags using a safer design. The shortage has created a major problem for the industry, delaying repairs and forcing the National Highway Traffic Safety Administration to announce a phased recall of additional Takata airbags.

Senator Bill Nelson, the Florida Democrat who disclosed the problem last month, has been urging automakers, at the least, to disclose when they sell vehicles that will ultimately be subject to a known recall over the next two years.

At least three other automakers, Fiat Chrysler, Mitsubishi and Volkswagen, also are selling vehicles equipped with the suspect airbags. FCA and VW spokespersons told TheDetroitBureau.com they will check to see if those two makers plan to adopt a disclosure policy similar to that taken by Toyota. 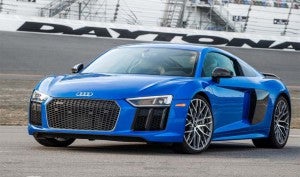 Both the Audi TT and the Audi R8 (shown here) also use the suspect Takata airbags.

Last November, NHTSA announced the recall of around 20 million vehicles equipped with faulty Takata airbags that could misfire when triggered by a crash. Two months ago, the agency announced it would recall another 35 million to 40 million Takata airbags. The precise number of vehicles covered is unclear, as some use multiple Takata bags – but since the latest action was announced, 15 automakers have announced recalls of another 16.4 million vehicles.

The problem has been linked to at least 13 deaths worldwide – 10 of them in the U.S. – and over 100 injuries. A study by an industry-funded panel this year indicated the problem is linked to the potentially unstable ammonium nitrate used to power Takata’s airbag inflators. The situation is worsened by a flawed design and a manufacturing defect that can increase the risk of a malfunction in areas with high humidity and heat, especially as airbags age.

As a result, NHTSA is phasing in its latest recall, initially focusing on older vehicles operating in regions like Southern Florida and Puerto Rico.

Several experts contacted by TheDetroitBureau.com said new vehicles are likely not to experience problems with the older Takata airbag design, at least not initially. Indeed, NHTSA said there have been no malfunctions with any Takata airbags used in vehicles produced since 2008. But the consensus is that the bags will need to be replaced eventually. NHTSA plans to complete the three-stage process by 2019.

Among the vehicles still being sold with targeted Takata airbags are 2016 Toyota 4Runner and Lexus GX460 SUVs. Some leftover 2015s, including the Lexus IS, IS and Scion xB models, also used the Takata bags. 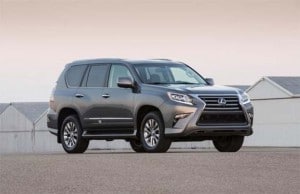 Both Toyota and Lexus dealers will now disclose the Takata recall problem to buyers of vehicles like this 2016 GX460.

Senator Nelson praised Toyota’s decision, calling it a positive step for consumers. While I still think automakers shouldn’t be selling vehicles with defective airbags, at the very least car buyers should know they’re purchasing a vehicle that will be subject to a future recall.”

The lawmaker also revealed last month that some automakers are using new Takata airbags that are on the recall list as temporary replacements in older vehicles subject to the original recall. The logic, according to industry officials, is that the new bags are not likely to malfunction for at least a few years. They replace older bags that are more prone to misfire.

But, eventually, those vehicles will be subject to a second recall.

Shortages of replacement bags using a newer, safer design, have caused long delays at dealer service bays. So far, only about a quarter of the vehicles covered by the initial recall have been repaired. Some manufacturers, including BMW and Toyota, have been contracting other suppliers in a bid to come up with alternate sources for replacement parts.