“I want to pass the baton.” 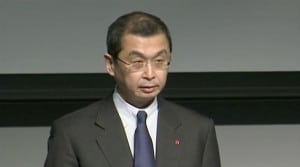 Takata CEO Shigehisa Takada has apologized for the airbag scandal but will soon step down.

The CEO of safety systems supplier Takata plans to resign, a move that could help the tarnished Japanese manufacturer raise the capital necessary for its survival.

Takata CEO Shigehisa Takada has come under intense fire in the wake of revelations about the company’s airbag systems, which have been linked to the deaths of at least 14 people worldwide, with more than 100 other injured. That has triggered the largest recall in U.S. automotive history, so far affecting more than 40 million vehicles.

Takata has been struggling to supply enough new airbag inflators to replace those under recall, and its cash crunch has made it difficult to ramp up production. The company has been looking at restructuring opportunities that might include finding a buyer.

According to reports from Japan, CEO Takada announced his plan to step down during the partsmaker’s annual shareholder meeting on Tuesday morning.

“I don’t intend to hold on to my position,” Takada said during the meeting. “Once I’ve delivered this company to a place where it’s not at risk of faltering, I want to pass the baton.”

The 49-year-old executive had come under intense criticism for his low-visibility involvement in the airbag scandal, the company also faulted for long resisting calls to expand the recall. It is common in Japanese business culture for senior executives to step down when a company is involved in a major scandal – as happened recently at Mitsubishi Motors following revelations it rigged mileage ratings.

The Takata problem appears to have been triggered by a manufacturing defect that makes its older airbag inflator design especially vulnerable to high heat and humidity. But a recent, industry-funded study also warned that the basic chemical used in the inflators, ammonium nitrate, is vulnerable to breaking down and misfiring as it ages.

If it malfunctions, an inflator can cause plastic and metal shrapnel to spew into the passenger compartment, something that has so far led to at least 10 deaths in the U.S. alone, with at least three others, and possibly four, now confirmed abroad.

The vast majority of the deaths and injuries have occurred in vehicles built by Honda, Takata’s largest customer. But at least 14 manufacturers, from major brands like Toyota, to niche sports car manufacturer Ferrari, have also ordered recalls.

Last October, the National Highway Traffic Safety Administration expanded existing recalls to cover 24 million vehicles. It added as many as 40 million more inflators to the list this spring. Since some models use several of the targeted devices, the exact number of vehicles that order covers has not yet been confirmed. But, so far, at least 14 million more have been added to the list.

NHTSA is phasing in the latest recall, initially focusing on older vehicles operating in high humidity regions, such as Southern Florida. It expects to complete the process by 2019.

But even the initial recall is going slowly, numerous owners reporting delays in getting their vehicles fixed due to a shortage of replacement parts. The shortage is serious enough that four automakers have had to continue using the older Takata airbag design, rather than a newer, safer system. That included Volkswagen, Toyota, Mitsubishi and Fiat Chrysler, according to documents released by a Senate committee. FCA this week plans to switch to the newer Takata airbags.

But those vehicles using the older design will ultimately be recalled, as well.

(To see more about Takata selling off ownership stakes in automakers to raise money for compensation, Click Here.)

Takata recently warned it expected more than $1 billion in losses for the fiscal year ending next March. The supplier has hired investment bank Lazard to advise it on restructuring opportunities. It has also been widely reported that Takata may either seek new investors or put itself up for sale.