Maker’s use of ethanol could overcome infrastructure issue. 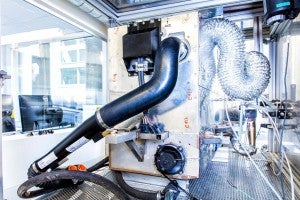 The hardware side of the Nissan e-Bio Fuel-Cell.

After all but falling off the radar as the spotlight shifted to battery power, fuel-cell technology is suddenly drawing attention again. Hyundai, Toyota and Honda will all be marketing hydrogen cars this year, and a Mercedes-Benz model is set to follow in 2017.

But those and other fuel-cell vehicles in the works will be offered in only limited areas due to the limited availability of hydrogen pumps, an issue that could take decades to resolve. Or maybe not. Nissan has revealed it is taking a novel approach to fuel-cell design that could sidestep the infrastructural challenge.

According to a report on a Nissan blog, the maker is developing a fuel-cell vehicle, or FCV, that uses ethanol as the source for its hydrogen. The form of alcohol found in beer, wine and liquor, ethanol can be sourced from corn and other crops, rather than using hydrocarbons.

“Unlike conventional systems, e-Bio Fuel-Cell features SOFC (solid oxide fuel cell) as its power source, affording greater power efficiency to give the vehicle cruising ranges similar to gasoline-powered cars,” Nissan said in its post, estimating the average gasoline-powered automobile has a range of around 373 miles per fill-up.

(Mercedes-Benz plans to launch hydrogen car in 2017. Click Here for more on the GLC F-Cell.)

A schematic showing the basic operation of the new Nissan e-Bio Fuel-Cell system.

At their most basic, fuel-cells combine hydrogen and oxygen to create both water vapor and electric current. That energy can be used to run the same electric motors found in a battery-car.

There are several different types of fuel-cells. The most common goes by the technical name, Permeable Exchange Membrane, or PEM. It requires a supply of pure hydrogen gas. It has been the system of choice for automakers such as Honda, Hyundai and Toyota.

The SOFC approach has been used for stationary and other devices but, until now, hasn’t been tried by a major automaker. It offers the advantage of using other sources of hydrogen, such as ethanol or natural gas, both of them rich with the lightweight element.

It’s a bit more complex process and does create some carbon-based exhaust but far less – and far more easily controlled – than what you get out of an internal combustion engine. 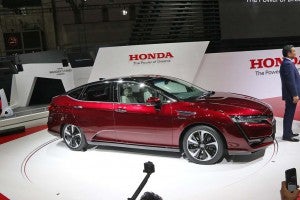 The maker also claims that, “With the bio-ethanol system, CO2 emissions are neutralized from the growing process of sugarcane making up the bio-fuel, allowing it to have a ‘Carbon-Neutral Cycle,’ with nearly no CO2 increase whatsoever.”

Sugar cane is widely used to produce ethanol in some markets, notably Brazil, though the alcohol is more frequently sourced from corn in the U.S.

The good news is that Nissan’s e-Bio Fuel-Cell wouldn’t be limited to staying within relatively close proximity of the handful of hydrogen pumps now available to the public – most in the U.S. are located in Southern California. As a result, Honda, Hyundai and Toyota are only selling their fuel-cell models in that region.

Ethanol is already in widespread use as a transportation fuel. It’s commonly mixed with regular gasoline and thousands of service stations across the U.S. offer E85, a blend that is 85% ethanol, 15% gas. Going to a 100% mixture would be a relatively easy challenge, certainly when compared to setting up an entirely new national production and distribution network for pure hydrogen.

Nissan isn’t the first automaker to look for alternatives to hydrogen gas to build momentum for fuel-cell vehicles. The old Chrysler Corp. in the 1990s showed off a concept vehicle, the Natrium, which used a recyclable solution of sodium borohydride. The liquid went through a system called a reformer that split off hydrogen atoms and then fed them to a more conventional PEM fuel-cell stack.

General Motors, meanwhile, tried to develop an onboard reformer that would be able to break down alcohol or fossil fuels to create hydrogen gas, also for use in a PEM stack.

Neither approach proved commercially viable. Whether Nissan’s e-Bio Fuel-Cell will overcome that hurdle remains to be seen. There are a variety of challenges, of which cost is only one. But if it proves effective it could be the breakthrough fuel-cell proponents have been searching for.

According to a recent IHS study, as many as 17 fuel-cell vehicles will be on the road within the next decade, but limited availability of hydrogen gas will continue to limit their marketability. The study warns that if FCV technology doesn’t gain momentum by 2030 it will likely lose the race to battery power as the alternative powertrain technology of choice.

(For more on the new IHS study, Click Here.)