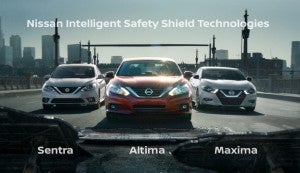 Nissan is revamping its advertising campaign to focus on its strengths, including safety and technology.

Nissan’s U.S. sales have been on a steady climb during the past few years. The increase comes, in part, from the maker’s affordable and performance-driven products that are often a little more affordable than competitors.

The company set a new sales record last year of more than 1.35 million units, which was an increase of 6.4%, largely on the strength its SUV line-up.

The brand’s sales are up 8.2% through the end of May, led by the new Maxima, Sentra, Frontier, Rogue and Murano. As part of its effort to keep the good times rolling, the company unveiled a new ad campaign aimed at helping potential customers tackle life’s daily challenges.

(Infiniti may add semi-autonomous technology for most of its models. For more, Click Here.)

“By putting Nissan’s advanced driver assistance systems at center stage – and telling their story in a compelling way – we are educating today’s drivers on technology available in the Nissan lineup. The message pairs Nissan’s brand-DNA of driving excitement with relevant product information about how our vehicles are engineered to help handle whatever the road may bring.” 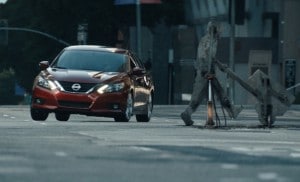 The brand's new ad campaign is part of an overall push to hit a 10% market share in the U.S. by next spring.

The first of these ads, called “Shark,” shows the driver of a Nissan Senta avoiding a collision with shark-finned car, courtesy of the Senta’s Blind Spot Warning technology. The rest of the spots will feature similar treatments on safety and convenience technologies.

The new campaign is a collective work of long-time Nissan United partner agencies, including TBWA/Chiat/Day and Zimmerman Advertising. It is grounded in a deep understanding of consumer insights and the needs of today’s drivers.

“It’s no secret that driving has become a chore, with stressful hazards and distractions at every turn. By focusing on intuitive and advanced safety technology and enhanced capabilities, our goal is to give Nissan drivers the thrill of knowing that they have the confidence to overcome whatever life may throw at them,” said Tucker.

(Click Here for a detailed look at Nissan’s 34.6% jump in earnings.)

“To do this, we bring to life the challenges of everyday driving – literally – and how Nissan delivers a solution through advanced technologies.”

The ads mark a change in how the brand is marketing itself and that effort comes straight from the top: Christian Meunier, Nissan’s senior vice president for sales, marketing and operations. Meunier took over that post in January after time as the president of Nissan Canada.

After taking on the role, he decided that Nissan’s advertising needed to focus on its strong points, such as safety and technology. Additionally, he’s implemented a more regional approach to campaigns.

“Maybe we should be advertising differently in Seattle,” Meunier told Automotive News in March. “Instead of running ads there that also run in Texas, maybe we should run the ads that run in Vancouver. Maybe Seattle has more in common with Calgary than Texas.”

(Nissan confirms plans to buy 34% of Mitsubishi. Click Here for the story.)

The new strategy comes just as Nissan enters the final year of CEO Carlos Ghosn’s Power 88 midterm business plan, which ends March 31. The goal of the plan is for Nissan North America, including Nissan and Infiniti brands, to have a 10% U.S. market share, up from 9.4% as of the end of April.