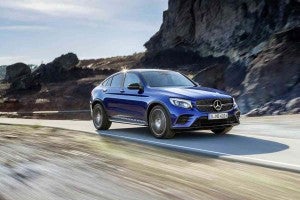 The latest version of the Mercedes-Benz GLC will get a hydrogen-plug-in driveline in 2017.

Mercedes-Benz is the latest automaker to confirm plans to put a hydrogen fuel-cell vehicle into production, joining a small but growing list that could reach 17 or more different models over the course of the next decade.

The luxury arm of Daimler AG has been fleet testing a number of hydrogen-powered vehicles in both California and Europe in recent years, including one off the small B-Class. But the production model will be based on the next generation GLC compact crossover. And the Mercedes GLC F-Cell will be the industry’s first to back up its hydrogen fuel-cell system with a plug-in hybrid.

The upcoming launch of the F-Cell is part of Daimler AG’s broader green car strategy, the German maker intending to spend around $8 billion on alternative powertrain technologies during just the next two years, said R&D chief Thomas Weber. Instead of focusing on one or two possibilities, Daimler will test the waters for a broad variety of technologies, each with “their justification and chances” for acceptance.

(Click Here for more on the Daimler green car initiative.)

Currently, there are two fuel-cell vehicles on the market in the U.S.: the Toyota Mirai and a version of the Hyundai Tucson. Honda is getting ready to launch the Clarity FCV about a year behind its original plan. 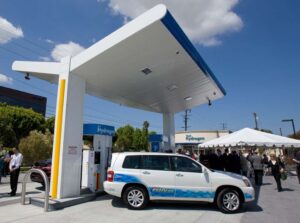 Hyundai officials recently confirmed they will launch an all-new fuel-cell vehicle, or FCV, to replace the Tucson in 2018. Another hydrogen car will be added soon after, likely through the sibling Kia brand.

(Hyundai aiming to be #2 in global green car market. Click Here for more.)

At least 17 new hydrogen fuel-cell vehicles will be on the market around the world by 2027, according to a study released a month ago by IHS Automotive.

“This could be a ‘now or never’ situation for FCEVs (fuel-cell electric vehicles) in mass market mobility,” said Ben Scott a senior IHS analyst, noting that hydrogen cars face a number of challenges that will limit their acceptance initially, such as the limited availability of fuel. But there are also advantages over battery power – notably long range and quick refueling – that could enhance their appeal.

(For more on the new IHS study, Click Here.)

A fuel-cell vehicle combines hydrogen with oxygen from the atmosphere in a device called a stack. The process creates a flow of electric current, with water vapor the only exhaust. That power can be used to run the same electric motors found in an electric vehicle.

The Mercedes-Benz GLC F-Cell appears designed to play to the strengths of both battery and hydrogen technologies, while downplaying their weaknesses. 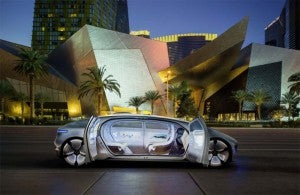 Mercedes-Benz has shown and tested a number of hydrogen concepts, such as the F 015.

Significantly smaller than past-generation fuel-cell stacks and, “for the first time fits into conventional engine compartments,” Mercedes explained in a statement. Under normal conditions, it would provide enough power to run the modified GLC utility vehicle. But under aggressive acceleration, the ute’s electric motors also will draw power from a 9 kilowatt-hour lithium-ion battery pack.

With the ability to use regenerative power, like a more conventional gas-electric plug-in hybrid, the carmaker says the GLC F-Cell will yield an estimated combined range of around 500 kilometers, or 310 miles. That is a European figure and could dip by as much as a third in U.S. EPA numbers, however.

While specific power and range data for the electric side of the system were not released, the size of the battery suggests the GLC F-Cell could run perhaps 15 to 20 miles using the lithium-ion battery pack alone, if necessary.

That could be a critical advantage considering the limited availability of hydrogen fuel. Currently, there are barely a score of stations open to the public in the U.S., most in Southern California. That’s why Honda, Toyota and Hyundai are limiting sales to that region for now. Lawmakers have allocated funds to set up at least 100 stations across California by the end of the decade, however, and other states may follow.

Similar steps are being taken in other countries. South Korea wants to have a small network of hydrogen pumps ready to show off the Hyundai/Kia technology during the 2018 Winter Olympics, and Japan has a similar goal for the 2020 Summer Olympics in Tokyo.

What Daimler isn’t saying is where it will market the Mercedes-Benz GLC F-Cell. If it initially chooses to focus on Europe it will see limited hydrogen availability, as well, though several members of the European Union, notably Germany, plans to beef up their infrastructure.

The pan-European Hydrogen Mobility Europe, or H2ME, on Tuesday announced a second phase of its venture, rolling out over 1,200 test vehicles and setting up another 20 hydrogen refueling stations over the next six years.

“Our aim has been to help bring the key businesses and public bodies investing in hydrogen mobility in Europe together to work on the common goal of making hydrogen-fueled transport a reality in Europe,” said Ben Madden, Director, Element Energy and project coordinator for the first two phases of H2ME.

Not everyone buys into the technology, Tesla CEO Elon Musk notably dubbing hydrogen power “fool cells.” Who will prove to be right remains to be seen, but proponents need to move quickly, according to the HIS study. Unless vehicles like the Mercedes GLC F-Cell begin building momentum with the public in the next decade, it warns, the technology will likely never be widely accepted.