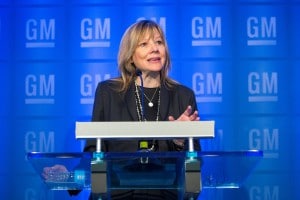 GM Chairman and CEO Mary Barra speaks with the media prior to the company's annual meeting.

The company has made sizeable investments in future technology, including the $1 billion acquisition of Cruise, a start-up company based on San Francisco focused on the development of autonomous vehicles, she said.

Despite a slowdown in the pace of new vehicle sales this spring, General Motors’ top executive said Tuesday she expects vehicle sales at or near record levels for the full year. 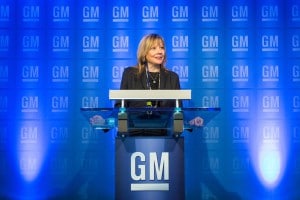 Barra presided over the company's 2016 annual meeting, which was held at GM headquarters.

Barra said 2015 was a strong year for GM on many fronts, including record earnings and record global sales. “We have continued this strong record in 2016,” said Barra, noting the company produced record profits and boosted its quarterly dividend.

“We continue to be focused on producing sustained long- term growth,” she said. “Our goal is earning customers for life.”

Barra said GM’s overall strategy of concentrating on retail customers and cutting down on its profitable fleet sales has already produced strong profits.

(Click Here for details about GM adding $2 billion to its safety net, increasing its credit line to $14.5B.)

“We still expect sales to remain at 17.5 million units, but we understand that we are in a cyclical business,” Barra told reporters prior to the company’s annual shareholders meeting.

During the meeting, GM also has passed something of milestone during the meeting with election of Jane Mendillo to the board. Half of all of the members of board of directors of GM, which has long been considered one of the cornerstones of American business, are now women for the first time in the company’s history.