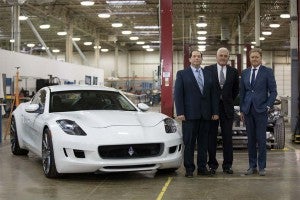 The first VLF Destino, the 200-mph sports car powered by a Corvette V8, was delivered to its owner.

Billed as the world’s fastest four-door, there have been plenty of questions about whether we’d ever actually see one of the sleek VLF Destino sedans other than at an auto show. But the project, which teams former General Motors “car czar” Bob Lutz, and Danish designer Henrik Fisker, has actually come to fruition, the first owner taking delivery this week.

First shown in concept form at the Detroit Auto Show in 2013 – with a near-production model returning to the Motor City event this past January – the Destino reportedly can tip the 200 mph barrier thanks to a V-8 engine borrowed from the Corvette.

“I’m over the moon with how the car turned out dynamically — steering, brakes and, of course, Corvette ZR-1 power, coupled with the convenience of a paddle-shifter automatic,” proclaimed “Maximum Bob” Lutz. “I’m really happy with color and trim, as well as the spectacular proportions.”

VLF was formed in 2012 as a partnership between the 84-year-old automotive veteran and industrialist Gilbert Villarreal. Ironically, the two originally teamed up in an attempt to buy the assets of the bankrupt Fisker Automotive, the plug-in hybrid company that had produced the Fisker Karma. They had hoped to replace the original PHEV drivetrain with a gas engine.

They lost the war for Fisker Automotive, but in January announced that Henrik Fisker himself would come onboard, adding the “F” to what had been VL Automotive. 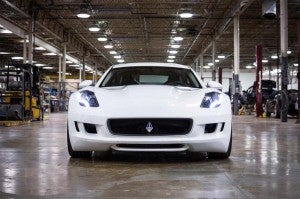 Many wondered if the VLF Destino would actually come to fruition, but the owner of the first one took delivery of it.

“I’m honored to become a partner in this automotive ‘Dream Team’,” the Danish designer said at the time. Before setting up his own company, Fisker had been the lead stylist for Aston Martin, and perhaps best known for penning the DB9 supercar.

(Click Here for details about Lutz looking to buy Fisker.)

He has worked on a number of other projects since Fisker Automotive folded in a spectacular financial flame-out. That includes several customized “Rocket” versions of the latest Ford Mustang.

Fisker offered his help tweaking the production version of the Destino, the first of which will go into the Lutz garage. Other customers include what the company has referred to as a “well-known music celebrity.” That is rumored to be Carlos Santana.

(To see more about expected 21 million self-driving vehicles on the road by 2035, Click Here.)

But VLF isn’t stopping there. It’s working on a second project that Fisker already had in the works before teaming up with Vilarreal and Lutz. The Force One will wrap a customized skin – and make other modifications – to the 745-horsepower Dodge Viper. There’s no word on when that model will go into production, yet.