Ford still outselling Chevy through May. 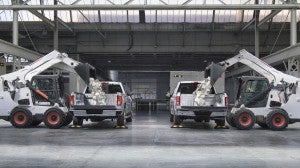 Chevy fired another salvo in the escalating ad war against Ford, claiming the aluminum bed of the Ford is more easily damaged by everyday mishaps on the job.

While not quite to level of hype associated with “The Rumble in the Jungle” or the “Thrilla in Manilla,” the escalating war of words between Chevy and Ford went another round with Chevy challenging the toughness of Ford’s aluminum truck bed.

As part of its latest marketing salvo, Chevy debuted a series of new videos, including one featuring a Chevy Silverado and Ford F-150 getting more than 800 pounds of landscaping blocks dropped into the bed of each … and the aftermath.

After the stones are removed, the rolled steel bed of the Chevy shows just scratches and a few dents while the F-150’s bed showed punctures and a crack. Then they allowed several “real people, not actors” to have a look.

“I’m surprised they’re trying to put a product out like this, ya know, and they’re supposed to sell ‘Ford Tough,’” said one person. A second person echoes the sentiment, saying: “I think Ford needs to change their motto.” 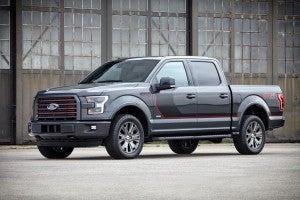 Despite the efforts to increase sales over Ford, the Dearborn,Michigan-based maker retains its lead over GM through May.

The other videos featured heavy and sharp objects dropped into the beds of each truck and in each incident, Chevy’s steel bed fared better than Ford’s aluminum one. The idea is that these types of events, or mishaps, occur on job sites and which truck will better handle the rigors of daily abuse taken by trucks.

The campaign is a dramatic example of Chevrolet engineers’ work to select the right material, enabled by the right manufacturing processes, for the right application, Chevy said.

“We engineer and build our trucks with customers’ expectations in mind, said Sandor Piszar, Chevrolet truck marketing director. “For example, Silverado features a roll-formed, high-strength steel bed because truck customers demand the ability to haul their toys, tools and other cargo. These videos demonstrate the real-world benefits of the Silverado’s bed, in both extreme and everyday scenarios.”

Chevy’s been poking Ford with a stick over its use of aluminum for more than a year now. It’s run several ads questioning the strength and durability of aluminum. In an older ad, “real people, not actors” were placed in a room with two cages and told one was made of aluminum and the other steel. A bear was then released into the room and the people scrambled into the steel cage each time.

One point they haven’t made is that they will be increasing their use of aluminum in the next generation of their full-sized trucks. The new models, due in 2018, will use it selectively to help cut weight and improve fuel economy and overall performance.

Ford officials, as they did with the last round of ads, played off the challenge from Chevy calling “scoreboard.”

“When you’re the market leader for 39 years, competitors sometimes try to take shots at you with marketing stunts,” Ford officials said in a statement. “The fact remains that F-150’s high-strength, military grade, aluminum alloy cargo box offers the best combination of strength, durability, corrosion resistance, capability, safety and fuel efficiency ever offered in a pickup. We have built nearly a million new F-150s, and our lead over the competition continues to grow.”

The ultimate proof of preference is in the sales results. Through the end of May, Ford has outsold GM in the truck segment. Ford has sold 324,990 F-Series trucks while Chevy sold 223,990 units. If you add in GMC’s totals, GM has still sold fewer trucks than Ford with a combined total of 313,294 units.