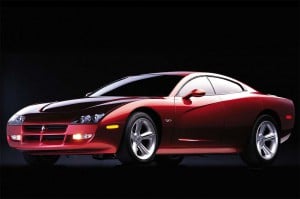 A Dodge Charger concept shown to dealers last August bore a strong resemblance to this 1999 concept.

While FCA officials are saying little to nothing about the planned mid-2018 replacements for the Dodge Charger and Challenger muscle cars, it appears they will likely switch platforms, adopting an “architecture” getting its first use for the all-new 2017 Alfa Romeo Giulia.

While there will likely be a number of modifications made for the American muscle cars, a key goal will be to slash the weight of the next-generation models. One media report this week suggested the Dodge Charger, in particular, is targeted to shed as much as 500 pounds of mass. That would mirror moves made by key rivals General Motors and Ford.

According to a report in trade publication Automotive News, the new Charger would also get a new, 300 horsepower twin-turbo inline-four that will be shared with the next-gen, 2018 Jeep Wrangler. That wildly popular SUV is also undergoing a major lightweighting effort as FCA prepares to meet tough new U.S. fuel economy mandates.

Another look at the Dodge Charger concept.

(Dodge shows off Challenger concept for SEMA. Click Here to check it out.)

Currently, the Dodge Charger and Challenger models share the same basic, Mercedes-Benz-derived platform that was a holdover from the ill-fated DaimlerChrysler “merger of equals.” The rear-drive chassis is also used for the big Chrysler 300. That large sedan is also expected to get a new architecture when the current model’s lifecycle comes to an end shortly before the end of the decade.

Details about plans for the three large models have been in short supply, kept largely on a need-to-know basis within FCA. What’s in store for the Challenger has been managed on the level of a national secret, but word has begun leaking out about the Charger, in part because FCA showed a prototype of the new version to dealers during a private meeting in Las Vegas last August.

That event also brought out a prototype convertible that reportedly will revive the Barracuda nameplate, one of the old Chrysler Corporation’s most beloved models from the 1960s and ‘70s.

According to reports, dealers who attended the Las Vegas event likened the Charger prototype to the 1999 Charger Concept developed by long-time Chrysler design director Tom Gale. There would likely be a number of changes made, of course, reflecting more modern technologies, such as LED lighting, as well as the need to upgrade fuel-saving – and performance-enhancing – aerodynamics. 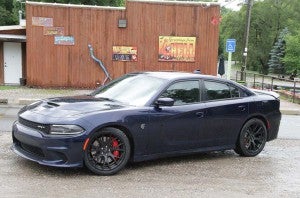 (Click Here to check out the hottest new models coming in 2017.)

The shift to a smaller, Alfa-derived platform could come as a shock to some traditionalists, but it would not be a unique move. Chevrolet downsized the latest-generation Camaro, moving it from its own rear-drive platform to one shared with the compact Cadillac ATS. On the plus side, by improving economies of scale, the next-generation Charger (and, perhaps, the Challenger) would likely get more features and upgrades than if Dodge were to rely on its own architecture, yet again.

And that very well could translate into a pony car that not only burns rubber but which will also gain the maneuverability of a European sports car. That’s certainly been the case with the latest-generation Camaro.

Based on the global product strategy FCA CEO Sergio Marchionne revealed in May 2014, the new Dodge Charger should make its appearance in mid-2018 and will likely carry a 2019 model-year designation. The next Charger – and possibly a reborn Barracuda – should appear about the same time.