All New German Cars Must Be Emission-Free by 2030

The shape of things to come? A prototype of Porsche's Mission E battery-electric vehicle.

It may be the home of the Autobahn, with its largely unlimited speeds, but in little more than a decade, German motorists will have to manage both those highways and local roads driving zero-emission vehicles, according to a senior government official. All new vehicles registered after that date will need run on batteries or hydrogen.

While a number of countries, including the U.S., are taking steps to increase the use of battery and other alternative powertrain technologies, Germany is laying out plans for an aggressive shift away from gasoline and diesel, said Deputy Economy Minister Rainer Baake, speaking at climate forum sponsored by the Tagesspiegel newspaper in Berlin.

“Fact is there’s been no reduction at all in CO2 emissions by transport since 1990,” said Baake. “We don’t have any answers to cut truck emissions right now but we do have answers for cars.”

The plan laid out by the otherwise conservative government of Chancellor Angela Merkel comes as Germany struggles with its commitment to lower the country’s emission of global warming CO2 emissions 80 to 95% by 2050. 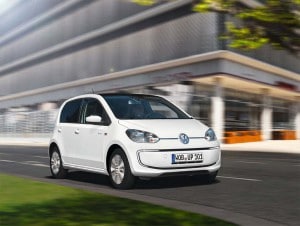 So far, German demand for battery-cars, like this VW e-Up!, has been marginal, at best.

(This radical Rolls-Royce features an electric drivetrain and an AI voice valet. Click Here to check out the Rolls 103EX.)

According to Baake, transportation accounts for about 20% of Germany’s CO2 emissions. Over just the next five years, Germany needs to reduce those emissions by 10 million metric tons annually, from 165 million tons in 2015.

The target date of switching to all zero-emission vehicles by 2030 reflects the fact that the typical automobile lasts about 20 years, according to Baake. The government isn’t planning to force gasoline and diesel vehicles off the road but is set to incentivize new, cleaner vehicle technologies.

The country’s motorists had been sold on diesel, which tends to deliver significantly better mileage than vehicles running on gasoline. But there’s growing skepticism about that technology, in part due to the revelation that Volkswagen had cheated on emissions tests to hide the fact its diesel engines weren’t as clean as promised.

New incentives are meant to boost demand for alternative technologies – which include not only battery power but also hydrogen fuel-cell vehicles. Along with financial incentives for buyers, the Merkel government has authorized setting up a nationwide network of high-speed battery chargers and hydrogen pumps. 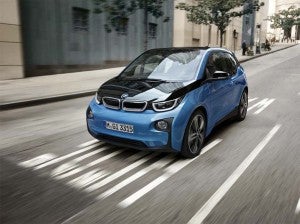 BMW hopes to increase sales of battery-based vehicles with special models like the i3 city car.

The country’s Environment Ministry hopes to see German motorists buy another 500,000 electric cars by 2020. Adding standard hybrid and plug-in models will bring that up to about 1 million battery-based vehicles.

The 2030 target won’t force older vehicles off the road but will limit new models to using some form of zero-emissions powertrain.

Germany’s automakers are already taking steps to respond to the government’s CO2 strategy. Daimler AG, for example, plans to have at least 10 new plug-in hybrids on the market by 2017, and the maker is also working on a number of pure battery-electric vehicles.

Volkswagen AG officials last week revealed plans to launch 30 advanced, battery-based vehicles by 2025. That includes a number of BEV models, such as the little VW e-Up!, as well as pure electric offerings planned for both the Audi and Porsche brands.

BMW has been rolling out new battery-based versions of its mainstream models but also has a separate sub-brand, BMW i, that markets both the plug-in i8 sports car and the i3 battery-electric vehicle.

Nonetheless, industry officials stress that they will need to see several significant breakthroughs to make electric models as appealing to buyers as today’s gas and diesel offerings. These will include improved range, faster charging times and lower costs, Bart Herring, general manager of product plans for Mercedes-Benz USA, told TheDetroitBureau.com.