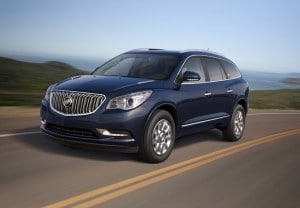 The mileage for the Buick Enclave may have been listed inaccurately by GM for years, according to Consumer Reports.

General Motors plans to compensate the owners of 130,000 of its large crossover vehicles that had fuel economy window stickers with ratings that were too high, according to media reports.

The automaker is expected to announce the move in the wake of the discovery that 60,000 of its 2016 Chevrolet Traverse, Buick Enclave and GMC Acadia models featured labels stating the vehicles had fuel economy ratings that were 1 to 2 miles per gallon better than the actual number.

GM ordered a stop-sale on the new models until corrected labels could be sent to dealers, which happened during the weekend, and they could replace the stickers. The automaker has sold about 170,000 units of the affected vehicles already.

Of that number, 130,000 were sold to everyday customers and the remainder were sold to rental car, commercial and fleet buyers. GM officials declined to comment about the compensation plan, according to Reuters.

(Click Here for details about the class action suit filed against GM over mileage inaccuracies.)

GM said in a statement Wednesday that the 1-2 miles per gallon mileage overstatement was the result of improper calculations. It said the inclusion of new emissions-related hardware in the 2016 Chevrolet Traverse, GMC Acadia and Buick Enclave SUVs required new emissions testing, but the fuel economy data from these tests were not captured in calculations made for EPA fuel economy labels. The error was discovered as GM engineers worked on the 2017 model year labels, Reuters reported.

The expansion comes, in part, as Consumer Reports magazine suggests that the automaker has been incorrectly stating the mileage in these vehicles for several years.

Incorrect mileage data has been in the news lately, as Mitsubishi recently admitted to selling vehicles in Japan with the falsified mileage reports. Volkswagen’s diesel scandal also involved faulty mileage ratings for those vehicles.

However, it is not a recent anomaly. In 2014, Hyundai Motors and Kia Motors paid penalties of $350 million related to overstating ratings on 1.2 million vehicles in the U.S. Additionally, Ford restated the fuel economy ratings on six vehicles after it was discovered that they were inflated. The Dearborn, Michigan-based automaker reimbursed owners of the vehicles.