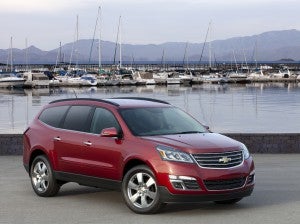 GM's put a stop-sale order on its 2016 large crossovers due to incorrect mileage figures on the window sticker.

Mitsubishi isn’t the only automaker facing trouble for misstating its fuel economy numbers. General Motors is facing its own mpg problems, while Nissan is being accused of manipulating emissions tests.

GM has told dealers across the U.S. to halt sales of some of its most popular models, in fact, after discovering it had overstated fuel economy numbers on those vehicles’ windows stickers by as much as two miles per gallon. It will need to replace the stickers before they can go back on sale.

“GM discovered an inadvertent error which affected the fuel economy information on the fuel economy labels on the 2016 model-year Acadia, Enclave and Traverse,” the maker said in a statement. “GM is stopping sale of the affected models until a corrected label is printed and affixed.”

The models affected include the 2016 versions of the Chevrolet Traverse, GMC Acadia and Buick Enclave, three of the company’s top sellers at a time when sport-utility vehicles have gained significant momentum in the American market. Nearly 60,000 of those models have temporarily been pulled off the market until the so-called Munroney stickers can be replaced. GM is not sure how soon that will happen.

The stop-sale will not affect the 2017 version of the GMC Acadia set to go on sale later this spring.

(Mitsubishi reveals it may have rigged mileage numbers on all Japanese models. For more, Click Here.)

It is unclear if GM will face fines from the EPA due to the problem, or if it will have to compensate owners who purchased the vehicles prior to the stop-sale. Depending on the model and powertrain configuration, their fuel economy may have been over-rated by 1 to 2 mpg. 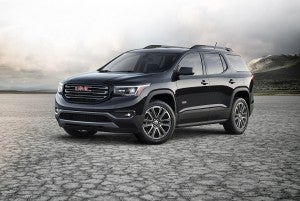 The 2017 GMC Acadia due to go on sale shortly is unaffected by the mileage reporting issue.

Separately, Nissan is facing at $280,000 fine levied by South Korea’s environment ministry for allegedly manipulating emissions tests on the small Qashqai model. The government says it will order the Japanese maker to recall 814 of the crossover vehicles and will file a complaint with prosecutors. There is no indication the problem extends beyond South Korea.

But a growing number of automakers are facing problems related to their stated emissions and mileage figures. That includes Japan’s ninth-largest carmaker, Mitsubishi, which has acknowledged cheating on mpg figures for the last 25 years. Virtually all of its models sold in Japan may have been affected, according to the preliminary results of an internal investigation.

That has hammered Mitsubishi Motor Corporation’s sales and stock price – and allowed rival Nissan to come in last week and purchase a controlling 34% stake in MMC at a bargain price.

An even bigger scandal has enveloped global giant Volkswagen AG which is accused of rigging diesel emissions tests through the use of a so-called “defeat device.” VW recently took an $18 billion write-down on 2015 earnings to cover a part of the expenses it expects to face due to the scandal. The maker has begun fixing the 2.0-liter turbodiesels sold in many parts of the world but has yet to reach agreement with the EPA on repairs for models sold in the U.S.

Mercedes-Benz parent Daimler AG is facing two class action lawsuits in the U.S. for allegedly cheating on its own diesel tests, charges the maker has so far denied.

Several other manufacturers have also been accused of bending their own diesel emissions numbers in Europe.

Rigged fuel economy numbers led to hefty fines and, in some cases, large legal settlements involving a number of other manufacturers in recent years, including Korea’s Hyundai and Kia, as well as Ford Motor Co.