Show car would get 31 miles per charge. 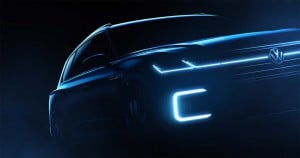 VW hints the Beijing SUV Concept will be sportier, more performance-oriented than its other SUVs.

Volkswagen will take another step in its apparent shift from diesel to battery-electric propulsion when it pulls the wraps off a new “advanced luxury SUV” at the Beijing Auto Show this coming week.

While the German maker is holding many of the details for the official unveiling, its offering some teaser images and a few intriguing details. Among other things, it notes the Beijing Concept will deliver more than 30 miles of range in pure battery mode. It also will feature a high-tech, “lounge-style” interior reminiscent of the BUDD-e minivan concept introduced at the Consumer Electronics Show last January.

While Volkswagen officials insist the company is not about to abandon diesel technology – with oil burners still accounting for about half of VW’s European sales – the ongoing emissions scandal seems to be encouraging a more rapid adoption of alternative propulsion, with an emphasis on electrification.

As TheDetroitBureau.com first reported last year, VW expects plug-based models to generate about a quarter of its global sales in the coming decade.

The Beijing Concept is expected to deliver a combined fuel economy of 78 miles per gallon in the European test cycle, according to VW. That would likely be 20% to 30% less using the tougher U.S. EPA test method. Fully electric range, meanwhile, is rated at 50 kilometers, or 31 miles. To put that into some perspective, the new Prius Prime plug-in delivers 22 miles per charge, while the second-generation Toyota Prius can manage 53 miles, according to the EPA. 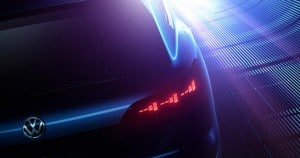 But the Beijing Concept is not only bigger than either of those plug-ins, but VW puts an emphasis on performance, the maker suggesting the “Concept moves luxury SUV design to a more sporty and elegant level.”

Nor is it offering specifics on the drivetrain itself, though the German maker does note that combined output from both the gas and electric drive systems is 376 horsepower and 516 pound-feet of torque.

The plug-based powertrain is just part of the emphasis on advanced technology. “The vehicle further demonstrates Volkswagen’s continued digitalization of the automobile,” promises a teaser news release, adding that the concept’s “digital operation and display system enables a completely new level of interactivity.”

It’s a safe bet that the Beijing Concept will pick up on many of the digital concepts seen in the BUDD-e minivan. Among other things, it featured a huge videoscreen mounted on the left side of the passenger compartment capable of displaying a mix of information lifted from passengers’ smartphones and tablets. Among other things, the system could link up to a home thermostat, lights or refrigerator which might send a message to buy beer – this being a German car – on the way home.

“This is the first car in the Internet of Things,” suggested brand boss Diess during a CES presentation in January.

From the driver’s point of view, large, twin displays replaced the driver’s conventional gauge cluster. The layout could be reconfigured with a tap or swipe, as could the display atop the center stack.

VW is expected to put many of the basic concepts from the Beijing Concept, as well as BUDD-e, in production over the next several years. So will its more upscale sibling brand. Audi plans to begin delivering an all-electric SUV by 2018.