Volkswagen CEO Matthias Mueller will be among those taking "substantial" cuts in 2015 bonuses.

Even though Volkswagen managers have so far stayed clear of blame for the maker’s diesel emissions scandal, they’ll be taking a serious financial hit, the automaker confirmed.

Under pressure from both inside and out, VW said it will cut top managers’ bonuses significantly, hoping to send a “signal” that it will let no one escape responsibility for the crisis. Last September, the U.S. Environmental Protection Agency charged the German maker with cheating on emissions tests for its 2.0-liter turbodiesel. Industry analysts expect the scandal will eventually cost the company tens of billions of dollars to settle.

While the exact size of the cuts has not been determined, the corporate statement said, “different models (are under study) which would constitute a reasonable and fair solution for all parties involved.” For senior managers, “as a consequence, this would lead to a significant reduction” in bonuses that traditional can account for a major portion of annual pay.

The cuts under plan would cover 2015 and would apply to a range of senior executives, including members of the Volkswagen management board. Those execs – a list including CEO Matthias Mueller, oversee day-to-day operations at VW. It is expected that former chief executive Martin Winterkorn, who was forced out last September 23, also will be hit despite insisting he was not “aware of any wrongdoing.”

For 2014, Winterkorn received 1.62 million euros in fixed pay, but his bonuses and other benefits drove his total package up to 15.86 million euros. 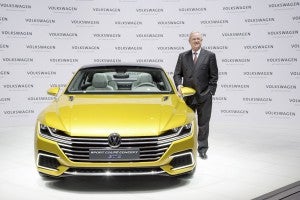 Bonuses made up nearly 90% of the pay for former VW CEO Martin Winterkorn for 2014.

One group of top managers would apparently be exempt, however, the supervisory board that serves as the equivalent of an American board of directors. But Hans Dieter Poetsch, the former VW chief financial officer named board chairman last year, will take a cut in bonus, according to VW, “at his own request.”

Both the management and supervisory board “jointly agreed that — given the current situation of the company — a signal should also be sent with respect to the topic of the management board’s remuneration,” VW said in its statement.

The specific cuts will be detailed in Volkswagen’s annual report. It is due to be published on April 28, several months late. The carmaker earlier this year delayed the release, while also postponing its annual meeting, due to questions about how much of the cost of the crisis would be accounted for in 2015.

(VW among the few exceptions as March delivers strong U.S. sales. Click Here for the latest.)

So far, VW has set aside a bit over $7 billion to cover anticipated costs, while also lining up a $20 billion credit line.

But a lawsuit filed by the U.S. Justice Department on behalf of the EPA could hit the maker with as much as $46 billion in penalties for violating the Clean Air Act. That doesn’t include potential criminal penalties, nor civil claims laid out in hundreds of lawsuits filed by VW diesel owners, dealers and shareholders. And the maker is facing criminal investigations and civil suits in a number of other companies, as well.

Further complicating matters, it has gotten off to a slow start in efforts to fix vehicles covered by the scandal in some parts of the world, and it has yet to reach agreement with the EPA on a fix for U.S. vehicles. Until then, it also is barred from resuming sales of its diesel products in the States.