Two-thirds of line-up will be electrified by 2030. 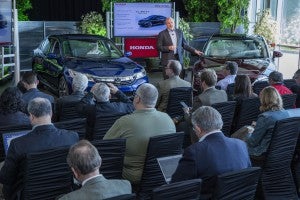 Honda plans to expand the Clarity platform into a trio of highly efficient vehicles by the end of 2017.

With relatively little fanfare, Honda unveiled a new platform for a family of vehicles with alternative powertrains the company plans to introduce by the end of 2017, including a new fuel cell vehicle that utilizes the new Clarity platform.

John Mendel, American Honda executive vice president, said during a press conference in Detroit the Clarity platform will also be used for battery electric vehicle that will debut next year and plug-in hybrid vehicle that will roll out towards the end of 2017 as a 2018.

“Clarity is going to occupy a unique position in the market place,” said Mendel, who declined to discuss future volumes, but noted that Honda top management has said by 2030 two-thirds of the company’s vehicles will be electrified.

The second generation Clarity is the first vehicle in the industry to offer fuel cell, electric and plug-in hybrid technology on one model platform, offering Honda customers an expanded array of electrified vehicle choices to suit individual tastes and driving needs, Mendel said. 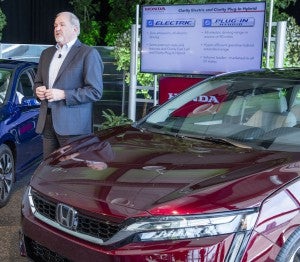 American Honda Executive Vice President John Mendel talks about the expansion of the Clarity platform with the media.

(Honda ready to roll farther with 2017 Accord hybrid. For more, Click Here.)

Initially at least, the fuel-cell version of the Clarity will be available only in California because that is where the fueling infrastructure is located, said. Ryan Harty, project manager with American Honda’s Environmental Business Development Office. There are currently about 15 hydrogen fueling stations in Southern California and more being added each month, he said.

In addition, Mendel noted there are signs that states in the northeast are beginning to think seriously of building fueling station capable of handling hydrogen, which is the basic fuel used for fuel cells, which can then generate electricity.

Mendel said Honda, which has teamed up with General Motors for fuel cell development, believes that ultimately fuel cells will emerge as the powertrain of choice across the industry.

The Clarity Electric will be the first affordable, midsize, five-passenger battery electric vehicle with premium content and features, the maker claims.

The third vehicle in the Clarity series, the Clarity Plug-In Hybrid, will launch in all 50 states later in 2017 and will be the volume leader in the series, said Mendel, noting, “It has more room on the inside than the Accord.”

(Click Here for more on the new Honda Civic Coupe.)

Mendel said the plug-in electric version of the Clarity will combine an all-electric driving range in excess of 40 miles with a “hyper-efficient” gasoline-hybrid extended range mode. “Nobody will get left behind with this vehicle,” he said.

All of the vehicles in the Clarity series will also feature advanced technologies, including Display Audio with Android Auto and Apple CarPlay as well as standard Honda Sensing safety and driver-assistive technology.

“This Honda trio of dedicated, advanced technology vehicles, along with the expanded application of two- and three-motor hybrid systems to our core models, represents a strong commitment to Honda’s future and will help create a new volume pillar for electrified vehicle sales.”

Technological innovations to the Clarity Fuel Cell include a fuel cell stack that is 33% more compact than its predecessor with a 60% increase in power density compared to the outgoing Honda FCX Clarity.

The more compact fuel cell and integrated powertrain, comparable in size to a V-6 engine, now fit entirely under the hood of the car, allowing for a more spacious cabin with seating for five adult passengers.

The new Clarity Fuel Cell is anticipated to receive an anticipated U.S. EPA driving range in excess of 300 miles, which provides for a refueling time of approximately three to five minutes, roughly equivalent to customers’ experience with gasoline refueling.