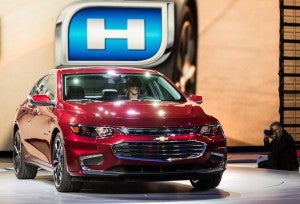 Low fuel prices have been driving a surge in demand for big pickups and SUVs. That’s a seeming recipe for poor fuel economy, but a new report reveals that the auto industry is not only managing to meet federal fuel economy standards but, in many cases, handily exceeding the current mandate.

A total of 56% of the newest models in dealer showrooms match or exceed today’s federal target, according to the survey by the Consumer Federation of America. And a number of vehicles already come close to meeting the tough, 54.5 mile-per-gallon target that’s not supposed to take effect until 2025.

“Fuel efficiency increasingly comes standard with new cars, trucks, and SUVs” said Jack Gillis, Director of Public Affairs for the CFA and author of The Car Book. “Even if you’re in the market for a large pickup or SUV, you’d have to go out of your way to find a true gas guzzler.”

The new Prius nearly meets the 2025 CAFE target, and the plug-in Prius Prime gets even closer.

“There is no reason to slow down on fuel economy,” said Gillis, countering recent concerns raised by some automakers that they won’t be able to meet the 2025 Corporate Average Fuel Economy, or CAFÉ, target. To the contrary, he added, “There is strong evidence manufacturers can meet the standards they themselves agreed to in 2012.”

(Is this the face of the upcoming Faraday Future battery-car? Click Here to find out.)

Manufacturers are doing so well that some of today’s vehicles can meet the steadily increasing CAFE targets to come early in the next decade. That includes the hybrid version of the newly redesigned Chevrolet Malibu, but also some traditional, gas-powered vehicles such as the Chevy Cruze and Toyota RAV-4. Even some versions of the Ford F-150 pickup would be, in current form, compliant with the higher mileage target of 2021.

And a handful of today’s vehicles now can meet the fuel economy goal for 2024. That includes the Toyota Prius, the Chevrolet Volt and the Smart ForTwo ED. Those three models all use some form of battery-electric propulsion, whether hybrid, plug-in or pure battery-electric.

Dr. Mark Cooper, CFA’s Director of Research, noted that the 2025 fuel economy target was originally seen as do-able with conventional gasoline or diesel power. And he stressed that the auto industry has come a long way using things like advanced aerodynamics; 8- and 9-speed transmissions, lighter-weight bodies and platforms and other developments to boost mileage. But he acknowledged that there likely will be a need for more electric propulsion to meet the 2025 target.

“The gasoline engine can go most of the way,” Cooper said, during a media teleconference, but “the contribution of EVs to meet the standard may be a lot bigger than people originally thought.”

Meeting the 54.5 mpg target for 2025 will likely require more battery-cars -- like these Tesla Model 3 sedans -- than planned, concedes CFA's Cooper.

That worries some skeptics who believe that getting to 54.5 mpg will be too expensive to justify. But Cooper and Gillis both countered that the cost of electric propulsion is dropping rapidly, even as range and performance improves. Chevrolet, for example, will launch the 200-mile Bolt later this year, with a price tag of around $30,000 after factoring in the $7,500 federal tax credit. Tesla, meanwhile, last month unveiled its $35,000 Model 3, taken in 400,000 advance reservations in the weeks since its debut.

As new technology, including battery propulsion, get into more mainstream use, Cooper asserted, costs will drop. And that, in turn, will mean that consumers will more than make up any increase in vehicle sticker prices through savings on fuel.

Cooper also noted that a CFA survey found “a remarkable consistency in consumer attitudes” towards better fuel economy. More than eight in 10 consider better mileage an important goal, with 54% rating it “very important.”

One reason is the overwhelming expectation by American motorists that today’s cheap gas won’t last, and that before the end of the decade fuel prices will be nudging back up towards $4 a gallon.

Incidentally, the CAFE target for 2025 may officially be set at 54.5 mpg, but due to various credits and adjustments, Cooper noted that in real world figures, the real goal will be just slightly more than 40 mpg.

(Fiat the latest automaker that may have problems with diesel emissions tests. Click Here for the latest.)