NHTSA pushes for meeting of the minds. 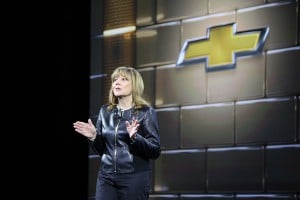 GM Chairman and CEO Mary Barra will attend the conference in Washington D.C. this week with aviation and auto industry leaders.

At a time when recalls are running at near-record levels, and with highway deaths on the rise again after a decade of decline, the auto industry is turning to an unusual ally for help in improving vehicle safety.

A conference scheduled to take place this Friday will bring together members of both the airline and auto industries, as well as regulators from the National Highway Traffic Safety Administration and the Federal Aviation Administration.

The move is far from a surprise. NHTSA Administrator Mark Rosekind previously served as head of the well-respected Transportation Safety Board and cited the major improvements made by the aviation industry. Until the crash by a Korean jet in San Francisco two years ago, there hadn’t been a fatal airline incident in the U.S. in almost a decade.

The April 22 joint conference was apparently triggered by a series of automotive safety lapses, including the ongoing Takata airbag recall, as well as the General Motors ignition switch debacle that has been linked to more than 120 deaths.

GM CEO Mary Barra, who has since ordered major changes in the carmaker’s safety procedures, is expected to attend the auto/air conference, which will explore ways to adapt aviation industry practices – such as safety data sharing – to the auto industry.

According to NHTSA, the event will provide auto industry officials “an opportunity to hear first-hand the work it took to embark on a safety path similar to the one we’re just beginning.”

How much automakers will be able to take away is far from certain. On the positive side, there has been a dramatic decline in the number of airline accidents in recent years, with only one major crash involving a Korean jet that hit a seawall while landing in San Francisco.

(Click Here for details about how Americans are driving farther, but dying faster on U.S. roads.)

On the other hand, safety recalls by the U.S. auto industry have surged to record levels two years in a row. While highway fatalities steadily fell during the decade prior to 2015, 32,675 Americans still were killed in 2014, and preliminary data suggest highway deaths rose by as much as 8% during 2015.

But there are significant differences between the airline and aviation industries. There are only a handful of commercial jet manufacturers and airlines are strictly regulated, with every aircraft manned by well-trained professionals. The streets, on the other hand, are clogged with cars operated by people who may have barely passed a minimal licensing exam – if they’re even licensed.

Nonetheless, safety experts believe there are a number of opportunities to share best practices, with data management one place to start. Under pressure from federal regulators, automakers have become more proactive already, more closely monitoring internal tests and warranty records to isolate and fix potential problems before they can become deadly. By sharing data between companies, some believe, an issue like the Takata airbag problem might have been caught years ago.

(To see more about the 20 automakers committing to new standard braking by 2020, Click Here.)

Automakers have already taken preliminary steps to work together. Last month, a consortium of 20 manufacturers working with NHTSA announced plans to make automatic emergency braking technology standard on almost all of the vehicles sold in the U.S. by 2022 – years sooner than would be possible through the normal regulatory process. An ongoing industry-government consortium will now explore other safety opportunities.