Swedish-Chinese maker looking for another home run with wagon. 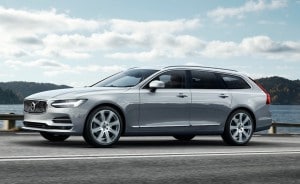 Volvo wagon fans will feel their hearts go pitter-pat with the introduction of the new V90 wagon.

Volvo’s drawn plenty of accolades in recent months, including the North American Truck/SUV of the Year for the XC90, but nothing touches the hearts of Volvo purists like the company’s station wagons.

The love affair begins anew with the company’s just-debuted V90 wagon unveiled at the Geneva Motor Show, and joining the company’s top-of-the-line 90 series vehicles: the aforementioned XC90 and the recently released S90 sedan.

“We have a very strong position in the estate segment,” said Håkan Samuelsson, president and chief executive of Volvo Cars. “In many people’s minds we are known as the definitive estate brand. While the Volvo brand today stands for more than estates, we are proud to carry forward this rich heritage with the V90.”

With highly capable wagons, such as the V70 Cross Country, part of the company’s past, the V90 has a lot to live up to and appears ready to deliver, starting under the hood.

Leading the way is the T8 ‘Twin Engine’ plug-in hybrid. Power comes from a 2.0-liter diesel paired with an 87 horsepower electric motor to develop a combined 401hp and 472 lb-ft of torque. 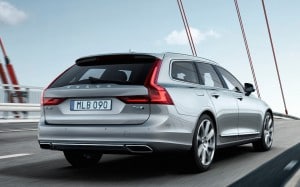 The new V90 wagon pays homage to the company's design legacy, but also moves it forward with the new exterior.

(Volvo lifts the covers off the new flagship S90. For more, Click Here.)

Other powerplants available are variants of the 2.0-liter, four-cylinder base, including the T5 producing 250 hp and 258lb ft of torque and 41.5 mpg. There is a diesel version called the D4 that uses a two-stage turbo to produce 187 hp and 295 lb-ft of torque getting 62.7 mpg.

Volvo also has a D5 twin-turbo diesel engine with 232 hp and 354lb-ft of torque is also available, in a four-wheel drive format. This set up gets drivers 57.6 mpg . There is a more powerful all-wheel drive version: a turbo- and supercharged four-cylinder T6 petrol engine with 315 hp and 295 lb-ft, but it gets just 38.1 mpg claimed fuel economy and 169g/km emissions. All of these powerplants are mated to an eight-speed automatic gearbox.

Volvo’s been making news these days as being one of the leaders in autonomous and semi-autonomous vehicles and the V90 continues that trend with Pilot Assist semi-autonomous drive technology. The set up includes one of the most advanced standard safety packages available, with large animal detection and run-off road mitigation, and class-leading connectivity including smartphone integration with Apple CarPlay.

However, what’s impossible to ignore is the interior styling and function of the newest generation of Volvos. 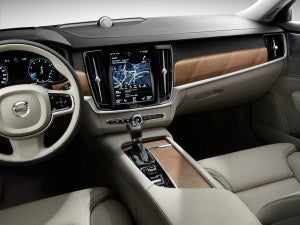 The V90 gets the same dashboard layout, including the same large touchscreen infotainment interface and digital dashboard technology, as the S90.

“The modern premium estate is all about the intriguing combination of a luxurious experience with the functional origins of the estates silhouette. The sophisticated ambience of our new Volvo Interiors is combined with a great cargo space, providing the right kind of functionality – whether through connectivity or cargo and storage solutions,” said Thomas Ingenlath senior vice president for design at Volvo Cars.

The new V90 gets the same dashboard layout – including the same large touchscreen infotainment interface and digital dashboard technology – as the S90.

Not only is all of the entertainment functions of the new wagon tied into what appears to be nearly an iPad-sized touch-screen display, so too are the temperature controls and other functions, all a sleek, forward-looking display that is clean and easy-to-see.

On the outside, the V90 borrow heavily from the recently introduced S90 sedan. The exterior shape is lower and more aerodynamic looking than Volvo wagons of the past, but is not so much a departure from the past that fans won’t recognize it. No pricing or details about availability were revealed.