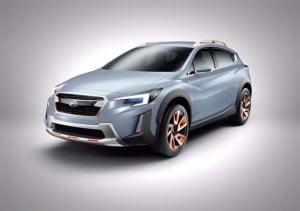 The Subaru XV Concept will strongly influence the next Crosstrek model.

Subaru has long been known for building solid, go-anywhere vehicles, but not necessarily for giving them the sort of upscale feel that has become increasingly common on even today’s entry-level models.

That’s beginning to change, as the maker has demonstrated with recent additions and updates like the latest Legacy. Now, it’s getting ready to a bit more style and panache to its Crosstrek line – or so we anticipate from the Subaru XV Concept making it debut at the 2016 Geneva Motor Show.

“In the area of functionality essential to a Subaru car, excellent aerodynamic performance is teamed with the ample road clearance and luggage space required of a crossover vehicle, achieving blend of function and style,” the Japanese maker says.

(Check out all the news at the 2016 Geneva Motor Show. Click Here.)

The name, XV, might confuse Americans a bit, but that’s the badge you’ll find on the Subaru Crosstrek sold in most of the rest of the world. 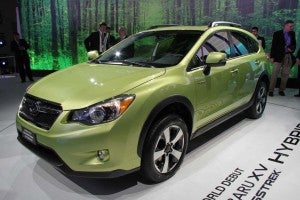 Subaru has used the XV name for a number of recent concepts, including this hybrid model shown last year in NY.

Echoing the low-and-wide theme are the broad Subaru honeycomb grille and hawk-eye headlamps. The nose blends shapes of silver, “active” orange and matte black. Black cladding wraps around the full length of the vehicle, while large fender flares are meant to “express the reliability of Subaru All-Wheel Drive,” the maker explains.

Subaru designers describe the overall look as their Dynamic X Solid language – which may explain why they’re drawing pictures rather than writing press releases and reviews.

Subaru isn’t revealing much in the way of powertrain, suspension and other specifications, though it’s easy to assume that the next XV/Crosstrek will offer more passenger and cargo space than the existing utility vehicle.

Meanwhile, we can confidently expect Subaru to retain its trademark Boxer engine and all-wheel-drive layout when the new ute comes to market sometime in 2017.

Subaru has been following general industry trends, which is bound to translate into improved aerodynamics and lower mass than the existing Crosstrek, meanwhile. That, in turn, would mean improved fuel efficiency.

We’ll have to wait until later this year to get a better sense of what’s coming when it’s time to take the new Crosstrek into production.

(After a few detours, Toyota’s new C-HR crossover is finally ready for production. Click Here for the story.)