Porsche Looks to Past for New 718 Boxster 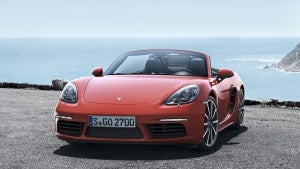 The new 718 Boxster comes with a new smaller, but more powerful engine than its predecessor.

Porsche engineers and designers must have been in a sentimental mood recently as its two introductions at the Geneva Motor Show give a nod to vehicles past.

The 911 R is the modern take on the original track-ready racer introduced and the new 718 Boxster reaches even further back to pay homage of the 718 Spyder produced in the 1950s and early ‘60s.

The new version, however, is following the current trend of offering smaller, turbocharged engines putting out more power than their naturally aspirated forefathers. In the case of the new 718 Boxster, a 2.0-liter flat four cylinder putting out 300 horsepower.

Also available is a more powerful 2.5-liter flat four cylinder rated at 350 hp for the 718 Boxster S. Both new models are putting out zero-to-60 mph times around the four second mark: 4.5 for the Boxster and 4.0 for the S model, according to the automaker. 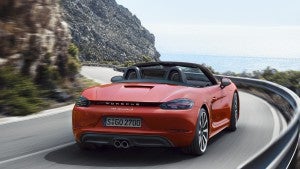 The new engines develop 35 more horsepower compared to those of the previous Boxster and are also up to 14% more efficient than their predecessors according to the New European Driving Cycle. EPA fuel economy figures will be available at a later date, Porsche said.

Both models come standard with a six-speed manual transmission. The Porsche Doppelkupplungsgetriebe (PDK), which now features fuel-saving virtual gears, is available as an option.

All of this improved power needs to find its way to the road and Porsche engineers have tweaked the 718’s handling package. The electric steering system is 10% “more direct” than its predecessor, improving response time and maneuverability.

(Click Here to see more of the Chevy Corvette Grand Sport at the Geneva Motor Show.)

The active suspension, which has also been retuned, offers an even broader spread between ride comfort suitable for long road trips and stiffness necessary for spirited driving. In addition, the maker’s the Sport Chrono Package, which is available on the 911, is offered as an option the new 718.

The package includes three settings Normal, Sport and Sport Plus. In models equipped with PDK, the Sport Response Button, which was inspired by motorsports, has been added. It sharpens the responsiveness of the engine and the transmission to promote best possible acceleration.

Making go faster and handle better is only complete when you make the outside match what’s under the hood and the designers did that too. The newly recast front fascia to make it look wider and more muscular while “significantly larger cooling air intakes serve as a distinct symbol of the new turbocharged engine generation,” the company said.