More miles driven in U.S. adding to the problem. 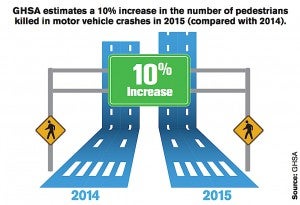 Increased miles by drivers as well as a larger number of people walking for exercise contributed to the spike in pedestrian deaths in 2015.

Looking both ways before crossing the street may not be enough these days as a newly released report estimates a 10% increase in the number of pedestrian fatalities in 2015.

The Governors Highway Safety Association analyzed data for the first half of 2015 and based on those results came up with the double-digit increase in deaths compared with 2014 results.

“Pedestrian safety is clearly a growing problem across the country,” said Richard Retting of Sam Schwartz Consulting and co-author of the report.

“It is important to understand the data underlying these crashes so states and localities can apply the right mix of engineering, education and enforcement to counteract this troubling trend.”

Retting said there are a number of factors at play in the increase, including an increase in the number of miles driven by Americans in concert with the number of people walking for exercise.

Along with the increase in pedestrian fatalities, pedestrians now account for a larger share − about 15% of all motor vehicle crash-related deaths − compared with 11% a decade ago.

Not surprisingly, states with large urban centers tend to have the highest numbers. California, Florida, Texas and New York accounted for 42% of all pedestrian deaths in the first six months of 2015.

However, when population is taken into account, the states with the highest fatality rate per 100,000 people, the numbers look a little different with New Mexico, Florida, Delaware, Nevada, Louisiana, South Carolina and Arizona leading the way.

Overall, 26 states saw pedestrian deaths decrease, including Vermont with no deaths, 21 reported increases and three had no change.

(Click Here for more about a new technology simplifying the use of connected devices in cars.)

“The recently passed federal surface transportation bill, the FAST Act, will give states more resources and flexibility to address their most pressing pedestrian safety problems. We look forward to working with NHTSA and our other partners to drive down these numbers and move toward zero deaths.”

The rise in pedestrian deaths mirrors the overall rise in traffic fatalities. After decades of relatively constant decline, U.S. highway deaths rose by a worrying 9% during the first nine months of 2015.

“For decades, U.S. DOT has been driving safety improvements on our roads, and those efforts have resulted in a steady decline in highway deaths,” said U.S. Transportation Secretary Anthony Foxx in a statement. “But the apparent increase in 2015 is a signal that we need to do more.”

While final figures won’t be available until later this year, the National Highway Traffic Safety Administration estimates that 26,000 American drivers, passengers, bicyclists, motorcyclists and pedestrians were killed in traffic crashes between Jan. 1 and Sept. 30, 2015. A total of 23,976 were killed during the same period the year before, with the death toll at 32,675 for all of 2014.

(To find out why Michigan is the most expensive state for car insurance, Click Here.)