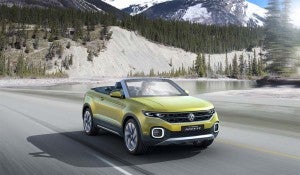 VW was expected to show a small SUV at the Geneva Motor Show -- but not one with a ragtop.

Volkswagen got a jump on the Geneva Motor Show Monday night, giving a standing-room crowd of automotive journalists a special preview of a quirky little SUV/convertible concept it has dubbed the T-Cross Breeze.

It’s hard to tell just how serious the maker is about putting a ragtop ute on the road. But it’s all but certain to come up with a production model in more traditional form. The German automaker has made it very clear it intends to fill the gaps in its line-up at a time when buyers around the world are trading in their conventional sedans, coupes and hatchbacks for sport and crossover-utility vehicles.

“The T-Cross Breeze reflects the new start for our brand,” suggested VW brand design chief Klaus Bischoff. The concept, he added, “is a teaser for the most compact sport utility vehicle that Volkswagen plans to make – and the nucleus of a new SUV and convertible design in the compact sector.”

Likely to be based on the same modular MQB platform used for VW models like the Golf and Polo, the T-Cross targets one of the fastest growing niches in the global auto industry, a segment where it would face such well-established competitors as the Nissan Juke and newer offerings such as the Toyota C-HR making its own debut in Geneva this week. 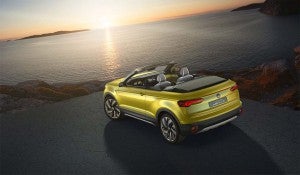 The T-Cross Breeze is about the size of a VW Polo.

Weighing in at just under 2,800 pounds, the VW T-Cross Breeze measures 162.7 inches, nose to tail, with a wheelbase of 101 inches. It’s 70.8 inches wide and, with the top up, it stands 61.5 inches in height. It’s officially a four-seater, though the rear is only slightly more roomy than the VW Polo.

While smaller than the Golf, the T-Cross Breeze visually resembles the bigger Volkswagen Tiguan, albeit with a wider front grille and more slit-like headlamps. LED running lamps frame the fog lamps.

There’s a large trunk lid concealing a cargo compartment of around 10.6 cubic feet, something you might not expect in a ute like this, especially one with a foldaway top.

How close to production VW has gone with the concept? Does VW really intend to make an SUV/convertible? Odds are low. Though Range Rover is ready to give it a go with the new Evoque convertible, there has only been one other ragtop ute – excluding the removable top Jeep Wrangler – and the Nissan Murano CrossCabriolet was roundly ignored. 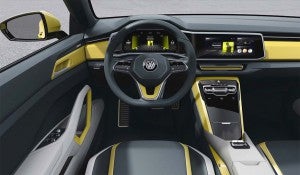 But that raises other questions, notably where will it be built? The market for SUVs has been booming from Boston to Berlin to Beijing, but the U.S. market is clearly truck crazy, and that’s a serious problem for VW which currently has just two utes in its line-up, the big Touareg and the mid-range Tiguan.

The plan is to fill the gap between those two models with a production version of the popular CrossBlue Concept. And, appropriately, it will roll off the maker’s assembly line in Chattanooga, Tennessee. An expansion program at the plant is currently underway to make room for the new ute. But whether a smaller SUV would also be built there is far from certain.

In fact, the T-Cross Breeze raises more questions than it answers.

The interior borrows heavily from a pair of concepts that Volkswagen unveiled at the Consumer Electronics Show in Last Vegas last January, notably the BUDD-e van. A modern take on the original VW microbus, it largely replaced knobs and buttons with touchscreens, voice and gesture control systems. The T-Cross introduces some of the same technologies and could mean that VW is serious about moving in that direction. 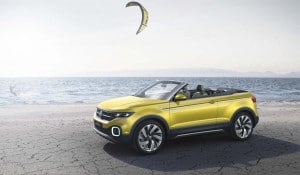 A production T-Cross is likely, but the odds favor a conventional hardtop, not a cabriolet.

(Bugatti reveals 261 mph Chiron supercar at Geneva. Click Here to check it out.)

As for power, the concept uses a turbocharged 1.0-liter three-cylinder powertrain putting out 110 horsepower and 129 pound-feet of torque through a seven-speed dual-clutch gearbox into the front axle. That’s not much, even for a vehicle this light, and the T-Cross Breeze is expected to take 10.3 second to launch from 0 to 100 kmh, or 62 mph. It has a top speed of 117 mph.

But it does manage to deliver 47 mpg. Even in an era of cheap gas, that’s an impressive number for a ute of any size.

One thing seems almost certain: VW has read the tea leaves and recognizes that the boom in utility vehicle sales won’t run down, even if and when fuel prices begin to rebound. Whether it will take the risk of offering a cabrio crossover is far from certain, but one can expect to see a production version of the VW T-Cross in some form or another in the relatively near future.