Hyundai Ioniq – From Low to No Emissions

Prius fighter will be offered with hybrid, plug-in and EV options 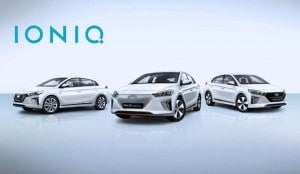 When it comes to taking on the ever-popular Toyota Prius, Hyundai is pulling off the gloves.

Like Prius, the new Hyundai Ioniq that debuted today at the Geneva Motor Show also features its own, unique body, something that the Korean carmaker hopes will let it stand out from more traditional compact models. But unlike Toyota’s hybrid, the Ioniq will be offered in three distinctive “flavors,” a conventional hybrid, a plug-in and a pure battery-electric version, as well.

Hyundai hopes to reach even further, officials noted, with the new battery-based model serving as the foundation of a new research program dubbed Project Ioniq. The goal is to come up with “innovative products and services.” That will touch on such high-tech topics as autonomous driving and connected vehicles. 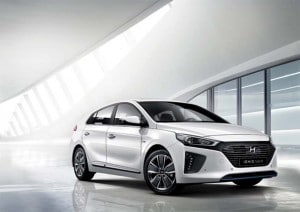 But, initially, the focus will be on environmentally friendly powertrain technology. And buyers will have three different options to choose from:

“With our pioneering ix35 Fuel Cell electric vehicle and several hybrid and plug-in hybrid models sold around the world,” says Thomas A. Schmid, Chief Operating Officer at Hyundai Motor Europe, “Hyundai Motor already has a proven capability in electrified powertrains. Now, with the launch of our first dedicated model, we are taking the lead as the only car manufacturer with hybrid, electric, plug-in hybrid and fuel cell vehicles in production.”

(Honda unveils Civic Hatchback in Geneva. Click Here to get a closer look.)

The high-tech concept carries over to the passenger compartment, all three versions of the Hyundai Ioniq offered with Android Auto, Apple CarPlay, and TomTom navigation and other live services. Atop the center stack, it all comes together through a 7-inch touchscreen display. 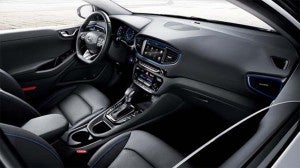 Hyundai claims the Ioniq has one of the best aerodynamic designs on the market, with a drag coefficient of just 0.24. It has also targeted mass by using lightweight materials such aluminum for the hood and tailgate.

As for the longer-term Project Ioniq, “The future mobility lifestyles that we envisage is about staying connected to our daily lives all the time without being bound by the limitations of time and space,” said Euisun Chung, Vice Chairman of Hyundai Motor. “We are determined to make this a reality so that everyone can enjoy better, more fulfilling lives.”

Chung said the carmaker will focus on three main areas: predicting changes in future mobility; creating new types of mobility to adapt to changing social needs and desires; and creating “new service models and mobility experiences that extend the role and definition of ‘cars.’”

(Bugatti rolls out 261 mph Chiron in Geneva. Click Here to catch it.)