Concept in name only. 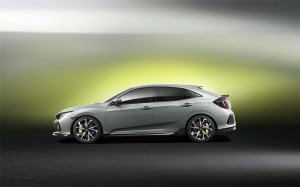 Honda adds yet another member to its Civic family with the Geneva debut of the 5-door hatchback.

Officially, it’s just a concept vehicle. But don’t let that fool you.

The Civic Hatchback the Japanese automaker has unveiled at this year’s Geneva Motor Show will soon be rolling into showrooms with only the most modest of changes. And it won’t look all that much different from the Civic Coupe concept that kicked things into gear last spring at the New York Auto Show – which is good news considering the raves the new compact line has been getting.

Honda plans to offer more variants than ever before once this generation of Civics is complete, from its mainstay sedan to the sporty Civic Type-R finally set to reach American shores.

(What else is making its debut in Geneva? Click Here to find out.)

The choice of Geneva is no surprise for the unveiling of the Honda Civic Hatchback, considering the strong demand in Europe for three- and five-door designs.

Honda declares this, the 10th-generation Civic Coupe the sportiest model it has ever brought to market. That will be in the eye of the beholder, of course, but there’s no question it has a more rakishly aggressive look than the outgoing model.  Like the coupe and sedan versions, the hatchback has a more planted stance, with a long wheelbase, short overhangs and character lines that rise from the nose, giving it a more athletic sense of motion.

In other words, it’s a lot less boxy than key competitors, such as the Volkswagen Golf. 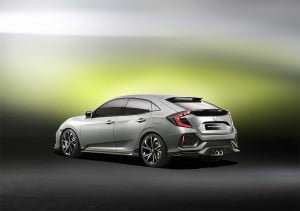 The Honda Civic Hatchback will be built in England and exported to the U.S. market.

(Is it a hybrid, a plug-in or an EV? The Hyundai Ioniq is all three. Click Here for more.)

The 2017 five-door is 30 mm, or about an inch, wider, 20 mm lower, and 130 mm longer overall than the current Civic Coupe. It features larger air intakes and new LED running lights and headlamps.

“We knew that we needed to create a striking and stand-out exterior design that challenged conventional European compact styling while staying true to the original Civic’s core values; a marriage of distinctive and sporty design, rewarding driving dynamics and versatile practicality,” declared Daisuke Tsutamori, the Civic Hatchback’s design leader.

We’ll have to wait for more details on the production model – which is expected to reach market in Europe early in 2017.

Expect the hatchback to be offered with a wide range of powertrain options reflecting the demands of the various markets the Civic five-door will be sold in. For Europe, a diesel is a certainty. For the U.S., however, look for both the turbocharged 1.5-liter and naturally aspirated 2.0-liter gas engine packages we see in the most recent entry into this compact family, the Civic Coupe. We also anticipate both CVT and manual gearbox options, depending upon market.

The Honda Civic Hatchback will be produced at the maker’s British assembly plant and will be exported to a number of other markets, including the United States.

(Opel goes forward into the past with retro-futuristic GT. Click Here to check it out.)