Gas Prices on the Rise in the US 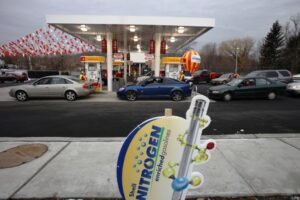 Gas prices are beginning to rise as crude oil prices continue to move upward and the spring refinery maintenance season starts up.

After declining throughout the winter, gasoline prices have started to rise in the last couple of weeks as the price of crude oil inches up and refineries begin getting ready for the spring driving season.

The national average price of gas has increased for six consecutive days for the first time since early November, though drivers continue to enjoy relatively low prices at the pump, AAA reported.

Prices at the pump have climbed by four cents per gallon versus one week ago and are likely to continue to rise as the spring refinery maintenance season ramps up. Monthly and yearly savings persist and drivers are saving five cents on the month and 65 cents on the year, AAA said.

Arizona is the only state where gas prices are down a nickel per gallon week-over-week.

Gas prices are moving higher in many parts of the country as refinery maintenance season gets underway and as some refineries cut production in response to abundant supplies. Swings in gas prices at the regional level are typical for this time of year as many refineries conduct maintenance in advance of the busy summer driving season.

AAA said despite these seasonal increases, abundant gasoline supplies and lower crude oil costs should keep gas prices from rising as high as drivers have seen in recent years.

But drivers in 14 states are paying more at the pump versus one month ago, and prices are up by a dime or more per gallon in the Midwestern states of Minnesota where prices have jumped by 16 cents per gallon, as well Oklahoma, Iowa, Ohio and Illinois.

(Click Here to see more of the Chevy Corvette Grand Sport at the Geneva Motor Show.)

Pump prices in 31 states are at or below the $1.75 per gallon and consumers in Arizona, Tennessee and South Carolina at $1.53 per gallon are paying the nation’s lowest averages at the pump, according to AAA.

Gas prices in nearly every state (49) and Washington, D.C., are discounted by more than a quarter per gallon, and drivers in 43 states are saving 50 cents or more per gallon on the year. California, Arizona, Oregon and Nevada are posting the largest yearly discounts at the pump.

Despite these discussions, many of these countries rely on oil profits to finance national operations and social programs, and thus any agreement faces significant headwinds as countries look to fill budget deficits by producing oil at higher levels, according to AAA.