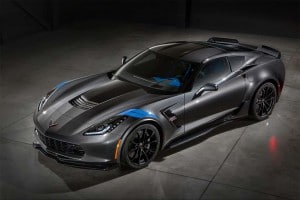 For the most part, American automakers have been keeping a painfully low profile at this year’s Geneva Auto Show, leaving it to overseas competitors. But even though the brand has largely abandoned the European market, Chevrolet did have something to show off during a show with a heavy emphasis on power and performance.

Think of the new Corvette Grand Sport as a hybrid of the “base” Stingray and the steroid-laden Z06. Picking up on some classic design cues and adding better brakes and wider wheels, among other things, the Grand Sport promises to fill a nice gap between the two current models.

“We didn’t hold back with the new Grand Sport,” Tadge Juechter, the chief engineer on the Corvette program, said ahead of the new model’s debut at Geneva’s PALExpo convention center.

The Grand Sport retains the naturally aspirated 6.2-liter LT1 V-8 found in the Corvette Stingray. And like that model, it will turn out 460 horsepower. 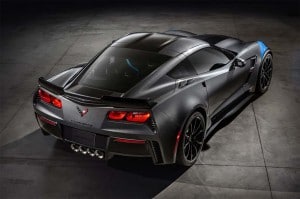 The Grand Sport gets a wider body, fatter tires, and optional carbon-ceramic brakes.

But the Corvette Grand Sport picks up a wider body largely influenced by the 650-hp Z06. It also gets wider wheels and tires, and brakes essentially lifted off the Z06, as well. It’s the first time a Stingray buyer now can add carbon-ceramic brakes and other features from the daunting Z07 package, the ultimate version of the big Z06.

Even without the added power, GM product development chief Mark Reuss notes that the new Corvette Grand Sport with the Z07 package was able to turn in near-record times on the performance loop at the maker’s Milford, Michigan proving grounds – just one second slower than the previous-generation Corvette ZR1.

Other features added to the Corvette Grand Sport include:

Chevrolet will offer an “endless” array of customizable features, as well, according to Corvette marketing chief Harlan Charles.

A special Grand Sport Collector Edition model, with details like satin black stripes, black wheels and a Tension Blue leather and suede interior, will be offered later this year in both Europe and the U.S.