BMW Vision Next 100 Offers Look at Century to Come 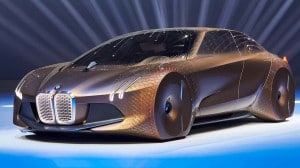 Marking its centennial, BMW rolls out the Vision Next 100 autonomous concept vehicle.

The auto industry, we’re frequently told, is in the midst of more dramatic change than it’s seen in nearly a century. So, what will the car of the future look like? For now, flying flivvers remain the stuff of science fiction, but plenty of other sci-fi concepts appear to be coming to your driveway in the near future.

Or so BMW is suggesting with the Vision Next 100 concept vehicle meant to mark the Bavarian automaker’s centennial. In keeping with current trends, the BMW Vision Next 100 will have the ability to drive autonomously – if you want. But slip into “boost mode”, slide out the foldaway steering wheel and it will remind you why the German marque has long been known for building the “ultimate driving machines.”

“Our objective,” explains BMW Group Design director Adrian van Hooydonk, “was to develop a future scenario that people would engage with. Technology is going to make significant advances, opening up fantastic new possibilities that will allow us to offer the driver even more assistance for an even more intense driving experience.”

The debut of the BMW Vision Next 100 marks the start of a global tour celebrating the company’s centennial. Stops are scheduled in Beijing, London and Los Angeles, as well as the Big Apple, where the Vision concept will be one of a number of introductions planned for the New York Auto Show later this month. 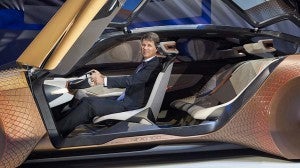 The BMW Vision Next 100 can be driven manually using its yoke-like "steering quadrant."

The design of the concept has something of a videogame look to it, with an almost pixelated pattern around the bold wheel arches. The prototype is meant to illustrate a variety of trends, including advanced aerodynamics – note the full fairing around all four wheels, the bodywork actually stretching to allow them to turn.

The body actually lengthens to reduce drag at higher speeds, a concept Mercedes-Benz actually pioneered on its own concept last year.

The double kidney grille is still there, of course, but it no longer serves as an air intake, hinting that there’s some sort of battery-based driveline inside.

The distinctive headlights and taillights serve multiple duties. They not only light the way but also signal approaching drivers as to whether the Vision is operating in autonomous or conventional driving modes.

(BMW adds M performance to the 7-Series.Click Here for more.) 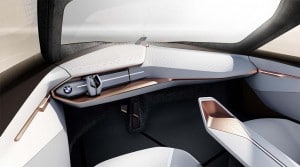 The steering system folds away when switched to autonomous, or Ease Mode.

The Vision Next 100 relies on an advanced, fabric-like body, as well as ultralight carbon fiber for much of its construction, the latter a material already in use for the BMW i8 with which it shares more than a passing resemblance.

Instead of a conventional steering wheel, the BMW Vision Next 100 uses a hybrid design, something between a wheel and an aircraft yoke, dubbed the “steering quadrant.” In “ease mode,” it tucks out of the way. The driver’s seat swivels around and the interior becomes more like a rolling living room.

During every day driving, motorists routinely communicate with one another and with pedestrians – giving a wave, for example, at a crosswalk or four-way stop. The Vision Next 100 includes something BMW has dubbed the Companion, a glowing orb that can glow green, for example, to signal its intentions.

“My personal view is that technology should be as intuitive as possible to operate and experience so that future interactions between human, machine and surroundings become seamless,” explains van Hooydonk. 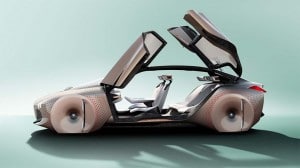 If a motorist prefers to operate the Vision in manual “Boost Mode,” there are all sorts of new safety systems to watch the road ahead, warn the driver of obstacles and guide the vehicle away from trouble. Triangular scales on the instrument panel flip up as a warning sign, when needed. There’s also an augmented reality screen that can highlight obstacles – such as a bicyclist obscured by a truck — and project the best line during hard driving.

Is this more than a flight of fancy? There’s little doubt that BMW is pushing the limits of design and technology with the concept vehicle, but surprisingly little in the Vision Next 100 is beyond the pale. And with autonomous driving all but certain to become a reality within the next decade it explores a number of critical issues – such as vehicle-to-vehicle and vehicle-to-pedestrian communications.

“If, as a designer, you are able to imagine something, there’s a good chance it could one day become reality,” says BMW’s design chief.

(BMW, Toyota are the auto industry’s most admired companies. Click Here for more.)