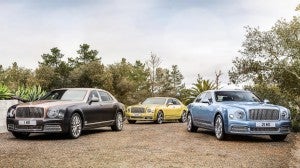 Bentley unveiled a more modern look for its Mulsanne line-up as well as two new models: the Speed and Extended Wheelbase.

Luxury gets redefined yet again at the Geneva Motor Show as Bentley debuts its new Mulsanne range of vehicles with options for everyone … well … everyone with enough money to buy a new Bentley anyway.

Built by hand at the company’s facility in Crewe, England, the luxury brand rolls out the two new versions of its flagship: the Mulsanne Speed and the Mulsanne Extended Wheelbase, which seems clearly focused on the Chinese market and its still-growing luxury market.

With the two new options, the company now offers three iterations at the top of its line-up.

“The Mulsanne is the epitome of Bentley’s DNA – exquisite, individual and powerful,” said Wolfgang Dürheimer, chairman and chief executive of Bentley Motors. “It defines luxury in the automotive world and offers a unique Bentley blend of luxury and performance.

“The three distinct handcrafted models are now available. The Mulsanne, with its understated elegance and sporting purpose, remains the consummate luxury limousine; the Mulsanne Speed is the pinnacle of luxury and performance thanks to its immense power, torque and refinement; and now the Mulsanne Extended Wheelbase, with its extraordinary airline-style seats and rear-passenger bias, becomes the new benchmark in automotive comfort.”

All three enjoy styling updates for the new model year, with most of the changes coming to the front end. The fenders, hood, radiator shell, grilles, lights – and bumpers fore and aft – have all been updated, giving the car a more modern and integrated appearance, according to the maker. 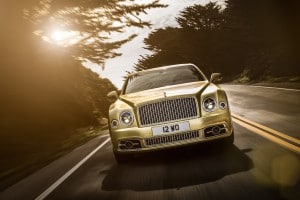 The vehicles get a host of safety and convenience features, such as blind-spot detection, emergency stopping and others that are expected for this kind of expense. In addition, the core of the new system is an all-new touch-screen-based infotainment platform with additional haptic controls, classic analogue gauges and state-of-the-art rear-seat entertainment.

The main 8-inch display touch screen is connected to a 60 GB solid-state hard drive for the storage of on-board media. The new Mulsanne can be specified with the world’s most powerful automotive OEM audio system – Naim for Bentley Premium Audio. This bespoke on-board audio system features 20 speakers, 20 channels, a 2,200 watt amplifier and Super Tweeters.

The two new additions to the line-up are a striking contrast to one another. The Mulsanne Speed is designed to give the unparalleled luxury touches that Bentley owners are accustomed to, but with the performance that exceeds their expectations.

The standard engine on the Mulsanne is a 6.75-liter V8 putting out 505 horsepower and 752 lb.ft of torque. This immense power is channelled through an eight-speed ZF automatic transmission and results in an impressive zero-to-60 mph time of 5.1 seconds with a top speed of 184 mph.

Using technologies such as cylinder de-activation and variable cam phasing, the new standard powerplant averages 19.3 mpg. However, the Speed’s V8 is just a bit better developing 530 hp and 811 lb.ft of torque posting a 0-60 mph time of just 4.8 seconds and a top speed of 190 mph. Additionally, when placed in S mode the Speed maintains the engine speed above 2,000 rpm so that the turbochargers are always spooled and ready to deliver instantaneous performance.

While obviously named Speed takes aim at one end of the market, the new Mulsanne Extended Wheelbase grabs another. It is designed with 250 mm of addition rear legroom, airline-style extending leg rests and a suite of technologies and creature comforts aimed at making rear passengers either more productive or relaxed while on the road. 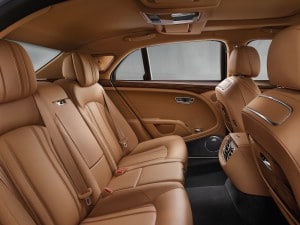 The new Mulsanne interior focuses on the comfort of its rear-seat passengers, including airline-style reclinable seats with extending leg rests.

(Click Here for details about the strong market that remains for high-end, powerful cars.)

Rear-seat passengers benefit from the introduction of the Bentley Entertainment Tablet – a pair of 10.2-inch Android devices (with 4G, WiFi and Bluetooth) seamlessly integrated into the backs of the front seats. With typically exquisite attention to detail, a single touch of a button engages a beautifully weighted mechanism, smoothly deploying the screens from their stowed positions.

The Android-powered tablets, which feature a Bentley-specific interface, have access to over a million Android Apps – such as Skype, Google Play and Spotify – and can be used away from the car, in the office and at home.

Each tablet has 32 GB of on-board storage (expandable to 128 GB via a Micro-SDXC card), USB ports and a front-facing camera. Audio can also be streamed through the vehicle speakers, and new destinations can be sent from the tablets to the Mulsanne’s navigation system. Internet browsing is via the car’s 4G WiFi system, permitting access to internet radio and local or streamed video.

The rear seats can also be specified with a deployable, folding table. For privacy, electric curtains at the rear are standard fitment and can be tailored with either a black or champagne colored interior lining.

Rear-seat passengers also benefit from a large-format sunroof over the rear cabin. Controlled by the passengers or the driver, the tilting and sliding glass panel (with Alcantara sun blind) allows natural light to flood into the Mulsanne’s cabin.