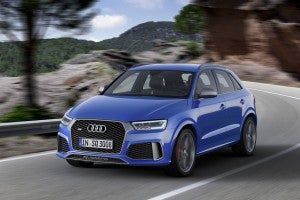 The Audi RS Q3 Performance boasts a 367 horsepower five-cylinder engine and will do zero-to-62 in 4.4 seconds.

Audi is one of many automakers looking to up its game in the luxury performance SUV segment and the new RS Q3 Performance appears to be ready for the challenge.

Introduced at the Geneva Motor Show, the new compact sport-ute is just another component in Audi’s plans to continue its current growth curve. Like it’s competition, it’s certainly nice on the inside and pleasing to the eye on the outside, but its what’s under the hood that is often the differentiator.

The German brand beefed up the 2.5-liter turbocharged five-cylinder engine by 27 hp so it now puts out 367 horsepower and 343 ft-lb of torque. With a top speed of 167.8 mph, it’ll sprint from stop to 62 mph in 4.4 seconds. The engine is tied to a seven-speed dual clutch automatic and gets 27.4 mpg combined.

It does go fast and it looks fast too, especially after a freshening for this iteration that includes a matt-titanium finish added to the frame of the front grille and air inlet duct, while the roof rails, upper edge of the rear diffuser and fins of the roof mounted spoiler also enjoy the same finish.

The interior gets an aggressive treatment with seats embossed RS Q3 logo covered in a combination of black Alcantara and leather. Audi offers the seats in the color combination black and blue with the optional RS performance design package.

The flat-bottomed RS sport leather steering wheel, the center armrest and the selector lever gaiter get blue contrasting stitching. Inlays in carbon twill blue, in which a blue thread is woven into the high-quality carbon material, round out this exclusive combination, according to Audi.

The instrument cluster has gray faces with white numbers and red needles, which makes them easier to read as well as stylish. Besides the sport seats, the Audi RS Q3 performance also comes standard in Germany with the parking system plus, MMI radio, Audi sound system, deluxe automatic air conditioning and LED headlights. No word yet on if it comes to the U.S. similarly equipped.

Orders are now being accepted for the Audi RS Q3 performance. The base price of the high-performance SUV in Germany is 61,000 euros. Deliveries of the RS Q3 performance are scheduled to begin in the second quarter of 2016 in Europe, but no word on if or when the performance version will hit U.S. shores.